The Villain Checklist: Contrast With The Hero

We’ve had a look at various facets of what makes a good villain, but for the next two entries, we need to shift the goalposts a little bit, and take about the most important relationship that the antagonist has: that with the hero. And up first, we need to discuss the crucial things that differentiate the bad guy/girl from the hero. We need to talk about that necessary contrast:

Contrast With Hero – The villain must in some way, major or minor, be a direct contrast to the hero character.

This is, once again, story-telling 101, but you would be surprised how easily people mess it up, either through inability to understand why the contrast is important, or from a lazy effort to make it blindingly clear that the two characters are different.

These are all just examples of course. But the key point is that, however major the contrast in personality and circumstances, the key contrast should be a little bit more small-scale and focused.

Let’s look at a few examples.

In A New Hope, the hero is Luke Skywalker and the villain is Darth Vader. The obvious contrast is that one is a backwater moisture farmer, and the other is the black clad Lord of the Sith. One is inherently good, the other seems inherently evil. But on a deeper level, we can also see a better contrast. Luke is somewhat innocent, naïve and trusting: he hooks up with Obi-Wan on a whim and a prayer, becomes obsessed with saving the princess, and only wants to be a hero and bring an end to the evil empire. Vader, on the other hand, in his torture of Leia, subterfuge in allowing the Falcon to escape and general scheming nature, showcases himself as someone both more conniving, and as someone much more experienced. That’s a good, deeper, contrast.

Nice colour contrast in this scene too.

In contrast (ha!), Darth Maul in The Phantom Menace is a nothing character, and so it is hard to draw an effective contrast between him and the heroic characters (there being no single antagonist in Menace, one of the films key structural problems). Obviously, he wears black, looks scary and has a different lightsaber to Obi-Wan and Qui Gon, but what can we say about a deeper contrast? That Maul is impulsive and angry where the Jedi are not? Obi-Wan’s actions at the end don’t back that up. That Maul is submissive to Sidious, a tool, where the Jedi are not? But the Jedi are tools, of the Jedi Council, just a different kind of tool. When characters are this paper thin, there is little to contrast.

One of the greatest contrasts in comic books can be seen in The Dark Knight, where we have, on one hand, the grim, serious, dark-clad caped crusader, committed unerringly to his war on crime and the pursuit of justice. And, on the other, we have an insane clown, with a commitment only to chaos and his own twisted gratification. But the contrast goes deeper still, to the way that Wayne and the Joker respectively treat the people around them, and how the Joker uses that against Batman. For the Joker, everyone around him is either a fiddle to be played or a target to be hit, while Batman defines himself in the film by his efforts to help others – Reese, Dent, Rachel, Gordon, to name a few – a sort of dichotomy between civic duty and pointless manipulation.

Nice focus in this one.

Compare that to, say, Ronan in Guardians Of The Galaxy and the titular Guardians themselves. The immediate contrast is obvious enough: the dour, Gothic galactic overlord and the diverse superhero team with a penchant for glib humour and dancing. One’s a serious political player in the universe, and the other are just wanted criminals. But what’s the deeper contrast between, say, Quill and Ronan? Is it, again, that one uses people for his own ends and the other doesn’t? It’s not as pronounced or as cleverly done as it is elsewhere if so. Is it the contrast between Quill’s concept of family and Ronan’s? In a way, though it’s really Thanos who is the more effective contrast in that regard.

In the world of video games, consider Breen in Half-Life 2. On the face of it, the player character, Gordon Freeman, is a lone wolf-style freedom fighter compared to Breen’s planet-wide “administration”. Freeman is a man of direct action, Breen sits in his literal tower and sends other people to do the wet work for him. But the contrast goes deeper than that, to the simple fact that Freeman is a mute warrior who lets his guns and crowbar do the talking, while Breen does nothing but talk, his weapons being words, that he uses, at length, throughout the course of the adventure. In that, the creators of Half-Life 2 take one of the key traits of their hero, and use it a set-up to make a contrasting key trait for their villain. 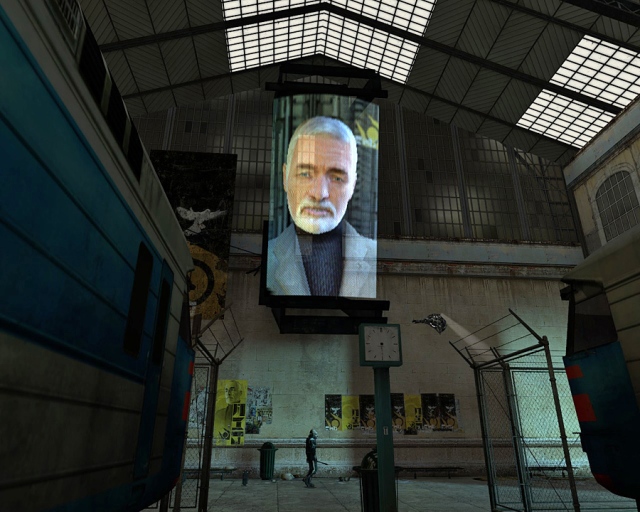 On the other hand, take Fallout 3, that I recently finished (the main plot line anyway). You can argue about who the main villain in the game is, but for a karmically positive run, it’s President Eden and his subordinate, Colonel Autumn. Neither are especially well-presented and neither make for a good contrast with the kind of player character a karmically positive run will throw up. The Lone Wanderer wants to find his father and help the people of the Wasteland, the Enclave wants to enforce their will and wipe out those who suffer any kind of mutation. But what is there beyond that? Nothing much really. One of the two games discussed understands that even characters distant from each other can be effectively contrasted, whereas Fallout 3 they are just props to throw off each other.

For our last two, let’s look at a few things I have seen recently. In What Happened To Monday, the bad guy is Glenn Close’s “Child Allocation Bureau” head, who takes illegal siblings from their families and puts them into cryogenic storage as a sort of a plan to stop overpopulation. It’s…a bit silly. And Close’s character isn’t a good antagonist, and she doesn’t contrast well with the sisters who end up opposing her. She’s a power-hungry hypocrite and the sisters are more reserved, hoping only to survive. But beyond that, Close is in the film so little that there is hardly any chance to form any other kind of contrast, especially one of any deeper level.

Lastly, I recently had the chance to re-watch X-Men: The Last Stand, that disappointing conclusion of the original X-Men trilogy. The film is so narratively incoherent that it’s a bit hard to separate the heroes out to find one clear antagonist, but I guess that it really should be Wolverine, opposed by, naturally, Magneto. Magneto wants a future for mutant-kind, even if takes force to achieve, and Wolverine wants to…save Jean Grey I guess? As part of that weird romantic triangle sub-plot those first three films were blighted with? And sure, the cult-like leader Magneto and the lonesome Wolverine have that natural contrast, but the film isn’t interested in doing much exploring of other, deeper, contrasts, at any other point in the production.

So, that’s contrasts. But of course, in order for this relationship to work, there can’t just be contrasts, there must also be a level of parity. And that equality is what we will discuss next.

1 Response to The Villain Checklist: Contrast With The Hero