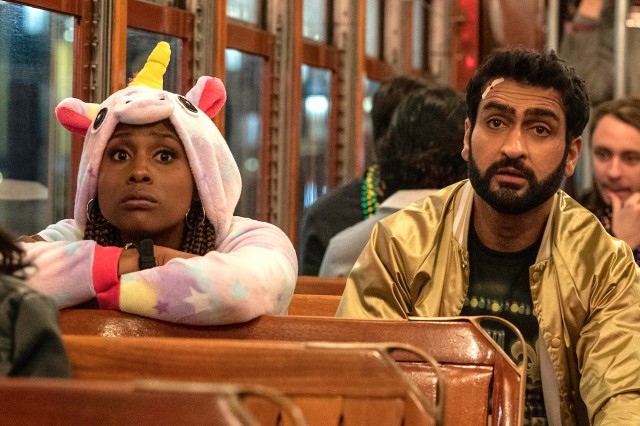 Just one of those nights…

Lockdown continues and the cinemas stay shut. But that doesn’t mean that we can’t have a good time, right? Netflix provides, and this time it has provided a comedy. Its seems like a very long time since a reviewed a film from that genre. And it has: the last flat-out comedy I reviewed was Between Two Ferns: The Movie. Man, this can be a dreary place sometimes, huh?

Breaking that streak is Michael Showalter’s The Lovebirds, another collaboration between him and lead Kumail Nanjiani, after 2017’s very well-received The Big Sick, that I, regretfully, have yet to see. But the comedy chops of both are very well-established, not least in Showalter’s Wet Hot American Summer, film and series, that remains the funniest send-up of 1980’s sex comedies ever made. There are other reasons to take this one in though, and I’ll admit that the growing trend of POC-cast alternative rom-coms is something that I like to see, a re-invigoration of what was a legendarily stale genre. COVID scuppered this one’s theatrical release, but it can still find a home online. So, is The Lovebirds a suitable advertisement for the comedy skills of its cast and crew? Or is it soon to be forgotten in the swamp of Netflix’ also-streamed?

Jibran (Nanjiani) and Leilani (Issa Rae) have been together for four years, and their fraught relationship is on the verge of ending due to their constant arguing. But when they become unwilling accessories to a murder they go on the run together, determining to clear their own names rather than trust a racially prejudiced justice system. The quest takes them past corrupt politicians, mass murders and secret societies, but also allows them to chance to properly evaluate their relationship.

The Lovebirds is an enjoyable enough affair. Is that damning with faint praise? Perhaps. I don’t mean to give the wrong impression. It’s a film that I doubt will live long in my memory, and it is not an absolute comedy classic. But if the goal of a comedy film is to first make me laugh, then The Lovebirds is a success, even if I wasn’t belly-chuckling the entire runtime. If a secondary goal is to keep you engaged through decent story-telling and strong characters, then it succeeds there too.

Rom-coms are typically about the beginning and fruition of a relationship, but this one appears to invert things by seemingly being about the end of one: after a very short prologue where we see Jibran and Leilani get together in the first place we fast-forward a few years to find them in what appears to be a contrasting toxic place, getting into furious arguments about the stupidest of things, like how they would get on if they were to enter The Amazing Race as a couple. The humour here is from the inanity of such a cause for argument, and a recognition that it exactly the kind of thing that couples on the brink would fly off the handle over.

I suppose in that way it is easy to connect to Jibran and Leilani, despite the over-the-top adventure they go on. Indeed, The Lovebirds‘ comedy actually works better because of how over-the-top the premise gets, since it’s such a dichotomy with the very recognisable couple at the centre of it. Ninjiani and Rae settle into their roles very well, exhibiting good chemistry and fully making you believe that you are looking at a couple that have had just too far of a run, and are more edge than lovey-dovey. The opening scene arguments will be painfully familiar for some, but is also quite funny, culminating in the agreeing to a mutual break-up in the car on the way to a party. Ninjiani and Rae are so comfortable with each other, it’s easy to assume that this is repeated behavior.

Then a car accident, then a murder, then wrong place/wrong time. Jibran and Leilani sort of stumble, semi-willingly, into their predicament when they think the hired killer is a police officer, and you’ll get a titter out of their slack-jawed reaction when said killer is using their car to run-over the unfortunate victim repeatedly, and the slow realisation that he may not, in fact, be a police officer. After a run-in with some witnessing hipsters who get the absolute wrong impression of what has occurred, the two become an erstwhile Bonny and Clyde, asking for “two alcohols” in a diner in a bid to make some sense of what happened. 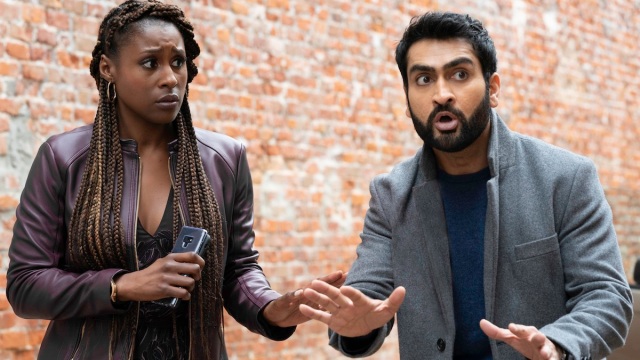 From there The Lovebirds becomes a sort of episodic affair – it actually could have been a TV show, and I’m sure that was considered – with Jibran and Leilani getting into a multitude of increasingly zany set-pieces. Anna Camp and Kyle Bornheimer turn up as some sort of political conspiracy in the making threatening to torture the two unless they give up information they don’t have (turned into another great bickering session, where Jibran mocks Leilani’s assertion that women love scars, so Jibran should submit to the torture ahead of her); the world’s most awkward life-or-death fist-fight in a frat boy party house; and, my personal favourite, an unexpected infiltration of an Eyes Wide Shut-esque secret society, masks and orgies and all.

The film jumps from set-piece to set-piece so quickly that you’re rarely off your toes, figuratively speaking, and only a comedy of this type could really get away with that. One sees the involvement of co-writer Aaron Abrams, of the similarly manic Young People Fucking, in this frantic pacing, that never wants to let The Lovebirds settle for too long. It gets that even the most serious situation – like a guy being threatened with a pan of boiling grease in the face – that everything should also curve back to some kind of humour. The conspiracy stuff is totally off the wall, and the film never has any pretensions of getting to the bottom of any of it. It’s really just window-dressing to Jibran and Leilani’s relationship, which could be going through the world’s worst therapy session or coming to an incredible conclusion depending on how things turn out.

While the basic beats don’t mess with the well-worn formula all that much – hell, there’s a white version of this movie with Steve Carell and Tina Fey in Date Night – The Lovebirds is able to exude an aura of being new and fresh in the way that it turns from relationship drama to wacky physical comedy at the drop of a hat, but without it feeling unnatural or forced. To give an example, when needing to make a forced entry into the home of a suspect, Jibran hesitates at breaking down the door, leading to another argument between the two, before Leilani attempts to do so with her high heels, subsequently ending up flat on her back. It’s the the film’s ethos writ small: Jibran and Leilani’s relationship problems, linking into some wacky physical yucks.

But there is plenty of good scripted humour too though, like the film’s villain’s dead pan thoughts on the two leads when confronted (“I’m sorry I have to kill you guys. You seem like a nice if somewhat annoying couple.”), Jibran’s attempted covering of an injury as a boxing mishap (“I’m what they call a “bleeder” in the boxing biz. They actually said I could never be a professional boxer because of how much I bleed”) and the hipsters as desperate to deny racial thinking as they are to report a murder (“She just happens to be African-American, he just happens to be a person of color, but I don’t think they’re murderers because they’re minorities, I think they’re murderers because they literally just killed a guy.”)

The film doesn’t shy away from the racial angle either, nor should it. Aside from its use in jokes – Leilani horrifies Jibran in a role-play of how she thinks a police interrogation would go shortly after they go on the run – that under-current remains throughout. The idea that two POC could be caught up in a murder and have their best option be to avoid the authorities and solve it themselves might seem far-fetched if you are watching this in the future, but sadly is not all that far-fetched today. Time and again the two come back to that point, and while there is always a humourous edge to it, you’ll leave in little doubt as to how much this kind of thinking permeates the script, the direction and the actors’ performances. Things like Always Be My Maybe flirted with the idea of having more of a racial angle then they did, but The Lovebirds just goes straight for it.

Showalter’s film looks line. I doubt he was hired because of his cinematographer’s eye, so it’s OK that The Lovebirds isn’t exactly a glorious visual spectacle. It is, instead, a down-to-earth rom-com in terms of its framing and editing. About the only time that the camera gets to have a little fun is in those sections dedicated to the secret society that the two main characters stumble into, a sort of Kubrick-parody where the unnerving masquerade that proceeds into an orgy is framed with the camera locked front-and-centre on a very unnerved Jibran and Leilani, who try their best to just go with it (one of my favourite moments being Jibran’s soft “Oh no, im-pos-tors” when the secret society leaders announces to the crowd that there are said “im-pos-tors” in their midst).

The Lovebirds is unlikely to make too much of a splash, even on Netflix, seeming to lack the critical praise that attracted people to The Big Sick, or the more all-round appeal of a Wet Hot American Summer. I would deem that a shame, because I really enjoyed it for what it is: a POC-centric rom-com with a zany streak, that isn’t afraid to touch on some serious ideas even while its main protagonists are getting involved in some very out-there adventures. Well-paced, well-written and well-acted, it deserves some of your time, and is good lazy night in fare. And God knows that we have enough of those at the moment. Recommended.

(All images are copyright of Netflix).

1 Response to Review: The Lovebirds