Having looked at the constituency picture of my own area in Dublin West, time for some brief thoughts on the national picture at the outset of the campaign.

Below is the state that the Dail was left at before its conclusion, with the Ceann Comhairle included among the Fianna Fail numbers for the sake of a more accurate electoral picture. The blue line represents the magic number needed to hold a majority, that every party is a long way aways from. 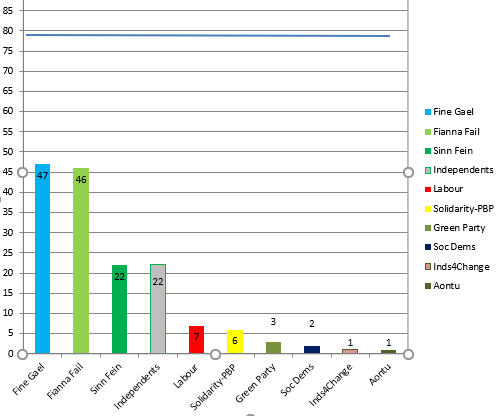 Pretty tight huh? Now let’s have a look at each of the party’s individually, allowing me the chance to formulate my general thoughts on their current fortunes and future chances.

This is make or break for Leo Varadkar and Fine Gael. If the polls that have been largely rigid for the last few years hold true, he might actually have a chance of leading the largest party in the Dail when the counting is done, but I still feel this is unlikely. People are tired of Fine Gael in government, and are increasingly tired of Varadkar, who seems to greater embody the common criticism of being a PR-obsessed do-nothing the longer his term in office goes on. The opening rounds of the campaign have been very negative for Fine Gael, with Varadkar and Murphy’s reaction to yesterday’s tragic story about the homeless man injured by a JCB less than ideal from an electioneering standpoint. The baffling own goal of the RIC commemoration debacle is still fresh in memories. It’ll be difficult for Fine Gael on the doorsteps, with plenty of demographics having reason to mark them down. That being said, I don’t see any kind of major collapse happening either, just seats that were marginal in 2016 falling out of their grasp. I’m predicting, right now, Fine Gael being returned with 40 seats, a loss of seven

Michael Martin and Fianna Fail should return as the largest party, which remains an astonishing thing to say ten years removed from their lowest moment. Whatever about the righteousness of it – more on that in the days to come – Martin should be a fairly safe bet to be forming a government in a few months time. Despite their culpability at every step, they’ll reap the usual benefits of being the side of the FG/FF coin not currently in government, and able to bash and criticise away. It’s hard to see where they lose seats, and easy to see where they might be able to pick them up. But in line with what I said above, I do not foresee some massive swing in their direction either, just a modest, by Fianna Fail standards, increase. I’m predicting them to end up with 51 seats, a gain of five.

Mary Lou McDonald and Sinn Fein are in a funny place. The common opinion seems to be that they have plateaued, and uninspiring results in the locals were only partly made-up for by the by-elections. But there is a continuing resentment of the two main parties out there, and Sinn Fein always stand to benefit from that. On the same hand, you can’t discount key events like Gerry Adams stepping away from Louth, and the siphoning of voters by the Green Party. I don’t see them coming away with less seats than they started, though that isn’t entirely unlikely. I’ll predict a very small increase to 23 seats, a gain of one.

Various shades of Independent are level with Sinn Fein in terms of seats, but the wind that was blowing the non-party way has died down a bit in three years. Some of them have gone to Europe, others aren’t running, with the “Independent Alliance” undergoing a quick and surprisingly quiet collapse in the days leading up to the vote being called. Certain people like Michael Lowry and the Healy-Rae’s will have seats for as long as they want them, and more right-wing challengers like Peter Casey and Verona Murphy will make waves. But I still see a drop in “Ind” numbers in the next Dail all the same. I’ll predict non-party numbers to be 16, a loss of six.

Up next is Brendan Howlin and Labour. It’s fair to say that it has been a stuttering and unexceptional 32nd Dail for them, struggling to recover from the 2016 catastrophe with an uninspiring leader and diminished stature. But they have taken their licks, and things can’t get any worse. They’ll hover up their share of the left-wing vote, and may see some returnees who abandoned them three years ago. The stated aim of getting to double figures is reasonable, but I think that is all it will be. I’ll predict ten TD’s returned, a gain of three.

Solidarity-People Before Profit are in a bit of trouble. The local numbers were terrible, and their efforts to make hay out of the FG/FF quasi coalition’s failings appear to have run out of steam with their portion of the electorate. The all too familiar balkanisation of the far-left – Paul Murphy’s RISE being the latest offender – continues to be an Achilles Heel that the larger parties do not share. They’re losing out somewhere, and maybe in multiple places, unless the campaign allows them to grab the spotlight with vocal criticism of government candidates. I’ll predict a return of four, representing a loss of two.

This really is the moment for Eamonn Ryan and the Green Party. Climate change has never been a bigger issue, and there is simply is no other party that can stake a claim to being the party of the environment. Young voters with no memory of their time in government – and no hard-thought interest in their pro-capitalism leanings – will flock to them, and they will be transfer friendly otherwise. Dublin looks like it will be fertile ground, and if the locals/MEP races are anything to come by, they could be looking at a very successful February 8th. What happens after that is anyone’s guess. I’ll predict a return of 12 seats, a gain of nine.

The Social Democrats have never really pushed on, and stagnation or failure here will only increase speculation that they’d be better off merging with Labour or the Greens. There are opportunities for seats, not least in the increased Dublin Central, where Maureen O’Sullivan’s retirement has opened the door for Gary Gannon. Some manner of gain is desperately required, or else Catherine Murphy and Roisin Shortall might as well throw in the towel. After yesterday’s news in Dublin Central, I’ll predict a return of three TD’s, for a gain of one, but they may not make it to to the next poll.

Independents4Change, after the Europe departures of Mick Wallace and Clare Daly, have only a single TD left, in the form of Joan Collins. Dublin South-Central is a tough constituency, and the hard-left vote is down, but someone of her experience should be OK, or at least I would hope so. But one must question the point of a political grouping like Independents4Change if they have only one TD, and I suspect she may quietly revert to being an all-out Independent after being elected. Still, that’s what she is running as, so I’ll predict a return of that single seat.

That leaves Peader Toibin and Aontu. They got a lot of attention when he split off from Sinn Fein, but the the locals were a disaster if going by their leader’s stated expectations. Aontu seem to have a philosophy better suited to the 70’s and 80’s, and the “pro-life” party are just swimming against the current. Worse, I think Toibin, minus Sinn Fein’s backing, might well be in trouble in his own constituency, with plenty of his base presumably following the party to someone else. We’ve been here before, and recently, with Renua. Perhaps it is wishful thinking, but I’ll predict they end up with nothing, a loss of one.

As for those political parties without representation in the Dail who may run candidates, there’s Paul Murphy RISE that remains part of Solidarity-PBP for electoral purposes so I include their fortunes with them (for the record, I think he’ll lose the seat). Workers and Unemployed Action are sort of represented by Seamus Healy, but he officially runs as an Independent (and may be in trouble in Tipperary). I am unaware if the Human Dignity Alliance of Senator Ronan Mullen are running any Dail candidates, but they won’t be elected if they are. Ditto for all of the other minor Irish parties, the list of which runs as follows as far as I am aware (comprising registered and unregistered groupings): the Worker’s Party, Republican Sinn Fein, the Kerry Independent Alliance, the Irish Democratic Party, Independent Left, Renua, the Communist Party of Ireland, Direct Democracy Ireland, Eirigi, Fis Nua, the Housing Rights and Reform Alliance, Identity Ireland, the Irish Freedom Party, the National Party, the Catholic Democrats, the Irish Republican Socialist Party, the Irish Socialist Network, Saoradh and Christian Solidarity.

That will leave us with a 33rd Dail that looks like this, reflective of the increased number of seats to 160 and a new majority target of 81.

What kind of a government would you get out of that? Taking Sinn Fein’s insistence that they will not contemplate an alliance with either of the civil war parties at face value, an outright majority for any coalition would appear to be impossible. A rainbow of FF/Lab/G/SD would be five short, so like-minded Independents could push it over the line, but such an entity would be unlikely to ever come to agreement. The best the left-leaning could get, with SF/Lab/G/SD/Sol-PBP/Inds4Change all together, would be 53. Fine Gael could try and get a formal alliance with Labour, the SD’s and Green to outsize Fianna Fail, but would still be beholden to them to govern.

Therefore, if my predication was to play out, you’re looking at a scenario that all and sundry know is coming: a Fianna Fail minority government, held in place by a “confidence and supply” agreement with Fine Gael. Essentially what we already have, with the names reversed.

But there are still more than three weeks to go in this campaign, plenty of time for things to change. I’ll be offering final predictions just before the vote.