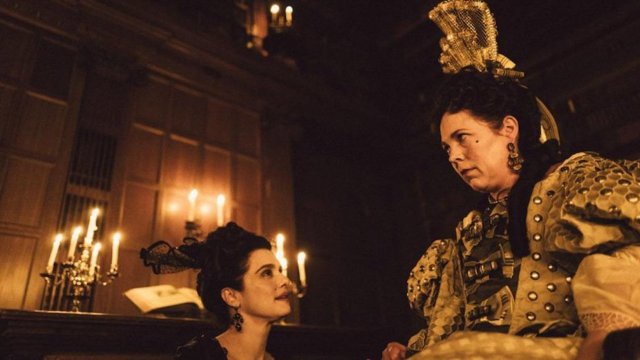 There will be inaccuracy.

I gave 2015’s The Lobster a miss, and at times I feel like I might be the only person in the world who did so. It wasn’t that it wasn’t…intriguing, but I have never been all that enamored by the type of art I would define as “weird for the sake of being weird” or films from the oft overdone genre of “indie arthouse”. Some may object to that description , but there it is. When I sat down to watch The Favourite, a sort of last second decision if I am being honest, I did so without fully realising that it was a Yorgas Lanthimos film, something I only twigged at the conclusion. Thus, The Favourite unexpectedly became my introduction to his work. So, after watching this “Based very loosely on historical events…” experience, am I more or less inclined to check out The Lobster now?

Largely confined to her palace, Anne (Olivia Colman), Queen of Great Britain, is a damaged figure who suffers from depression, a frequently child-like mentality and gout. She is dominated by her calculating and cruel friend Sarah, the Lady Marlborough (Rachel Weisz) who all but rules the country in her stead, calling for higher taxes to finance war with France. When Abigail (Emma Stone), gentry fallen on hard times, begins work as a maid in the palace, she soon sees an opportunity to insert herself into the Queen’s favour, beginning a vicious battle with Sarah, her cousin.

This was certainly an interesting one, on just about every level. It’s not hard to see why Lanthimos attracts so much attention, or why his films routinely find themselves on “Best of…” lists. I was expecting weird, and I got that, and I was expecting dips into the surreal, and I got that too. But I was quite impressed with how it all came together, and how the different levels of production were all of such a high level.

The Favourite has two stories in its three-hander narrative. The primary one is the brutal tete-a-tete between Rachel and Abigail, that provides the film’s backbone. With a spitefulness that would make the Borgia’s quail, the two maneuver around each other, playing a game of manners and a game of thrones, in between the barbs. Sarah wants to hold on to power from a misguided sense of national pride – her husband (Mark Gatiss) is off fighting the French in a background side-plot that occasionally takes the film into the realms of actual historical drama – and Abigail will do just about anything to get her previous life, or higher, back.

The affections of Anne become the battleground for this demented private war, enlivened by the interjections of opposition leader Harley (Nicholas Hoult), all playing their own games, whether they are motivated by financial worries or lust. There are themes of abuse of power and the grass always being greener: the film plays wonderfully with the idea that a winning position for either women is a poisoned chalice of a sort. Weisz, one of the great actresses of her era, imbues Sarah with that wonderful sense of God-like authority and confidence in every utterance, while Stone, rapidly accumulating a diverse back catalogue of roles, leaps into this race to the bottom of the moral abyss with gusto, playing a two-faced women of great ambition with aplomb. The two have an excellent chemistry, in every witticism, insult and triumphant coup de grace.

But really The Favourite excels best with its focus on Anne. The events depicted are a sensationalised version of reality – holding to the historical record just enough that it can’t be dismissed as complete fiction, though “period drama” would be fairer – but the resulting character study of Anne is one filled with heartbreak and genuine pathos. Anne is somewhat of an historical nobody nowadays (she was the first in the more modern, boring line of monarchs, who no longer fought civil wars, no longer deposed/were deposed themselves), her reign noted largely for the wars with France, with the Queen relegated to being summarised by the nasty gossip that was spread about her. The aging Queen, a vision of crumbling grandeur, has suffered the loss of 17 pregnancies, keeping 17 rabbits in her apartments as remembrances: she remarks, in maybe the films’ best line, that a piece of her has gone with every child lost. This may explain her own temperament, which is both childish and child-like in her desperation of attention, affection and respect, to the point where she allows herself to be dominated by her nominal inferiors. Like Lear, she wants grandiose declarations of love, which makes her seem both terrible and pathetic, but may well be more sinned against than sinning.

What’s so great about the depiction of Anne, and Colman’s performance, is how it seems a very true portrayal of a women in the throws of a mental and physical breakdown, swinging between moods and cogency. Anne wants to be comforted like a baby when she has an attack of gout, plays with her rabbits on the anniversaries of her miscarriages, feigns collapses when called upon to make difficult political decisions; yet at other times her regal authority emerges and she seems to be as stable and confident as any monarch. Such instability means she is easy prey for those seeking to emotionally manipulate her; but she herself engages in such manipulation herself.

There are no flat-out likable characters in The Favourite, but the sheer strangeness of proceedings helps to cover up what would otherwise be a significant problem. The film dallies with the idea of Abigail, then Sarah, and occasionally Anne being the actual hero, but they are all flawed and antagonistic in their own way at different points. The central message of a large part of the second half is that there are no real winners in this great game, something one character learns in a very hard way.

The sexual aspect of things forms the glue that binds the three women together. Anne and Sarah’s liaisons are something that allows the latter a physical and emotional control; Abigail uses it as a similar weapon, but with Anne and others, an additional step that marks her out as more ruthless than Sarah in a certain way. In a world where the sexual gratification and gaze of men is a constant pursuit – there are some nods to the #metoo movement here, for sure – much of the combat is little more than a simple search for dignity; but it’s hard to find, and to keep, especially if you’re trying to ingratiate yourself with a capricious monarch who mistakes sexual attention with genuine affection, or if your personal background is one of sexual abuse. The upfront depiction of such acts, and the frequent use of crude sexual language and imagery between the three women (and others), speaks to the directors intent to subvert the traditional descriptions of the era and its repressed sexuality: the effect is both serious and blackly comedic.

“Serious and blackly comedic” could also well sum-up the film’s script, from Deborah Davis and Tony McNamera, so acerbic it could be from Monty Python. It delights in various curse and slur words, and in shocking the audience with unexpected sexual vulgarity: when Sarah tries to get Anne to dismiss Abigail, the Queen replies in the negative because “I like it when her tongue is inside me”. Every exchange between every character is layered with manipulation or biting insults, to the extent that you start to wonder if anybody really likes anybody, though you can’t help but be swept away with the wit and appropriate sarcasm on display, most especially from Hoult, who clearly loves the chance to play what amounts to a bitchy fop out to preserve his own rents. There is an element of farcical slapstick to the comedy as well – at one point, Harley shoves Abigail down a hill in a moment played for laughs – but I never found it off putting in a tonal way.

Lanthimos, with Irish cinematographer Robbie Ryan (last seen on this site with his excellent work on the very different Slow West), crafts a visually engaging film. The Favourite could be a stage show, such is the plethora of static shots and basic whiparounds, but the camera takes in a wide swath of detail in every elaborately furnished room, frequently shoots from strange angles and the director has a knack for getting in close to his principals faces at the right moment, fisheye or no fisheye. The locales have a strange pseudo-dystopic feel to them in the way the men and women of state glide through them in their finery, debating how to fight a war with France, even as they then engage in the most malicious personal insults one can imagine, and all seeming so isolated even when the screen is crowded.

Other than that the director displays an expertise at the correct balance of light and shadow, especially in numerous scenes that take place in the palace’s secret passages. The film could almost be in monochrome, but it isn’t drab: the limited color palette rather suits the story being told, and maximises the impact of those scenes where more colourful, rather demented, behavior takes place, whether it be duck races, gentry flinging fruit at each other for fun, or one of the more bizarre dance numbers you are likely to see on film.

I must also take a moment to comment on the score of The Favourite, from a variety of classical artists. It is a fairly minimalist thing, defined by elongated pieces of repeating tones in a period specific style, but it did strike me as a very appropriate accompaniment, one that emphasised the claustrophobic nature of some scenes, and the sheer (intentional) awkwardness of others. I don’t think it will win many awards – it isn’t really detailed enough for that – but it did fit the film it was playing over very well.

I may well be more inclined to give The Lobster and Lanthimos’ back catalogue a shot now, even if I am given to understand that it may be stranger territory. But The Favourite is an excellent film in its own right. It’s acted very well, by three women performing at the peak of their craft, who dominate the screen and make The Favourite one of the best female-centered films I have seen in a while. The production is solid at worst and sublime at best, with excellent work put into cinematography, script and score. And the narrative comes together brilliantly in a well-paced, well-cut relationship and character drama, that mixes in black and slapstickish comedy at every turn without it ever feeling forced or off-tone. The Favourite is something people should definitely see as a film likely to be one of the more unique experiences of 2019.

Well worth checking out.

(All images are copyright of Fox Searchlight Pictures).

3 Responses to Review: The Favourite