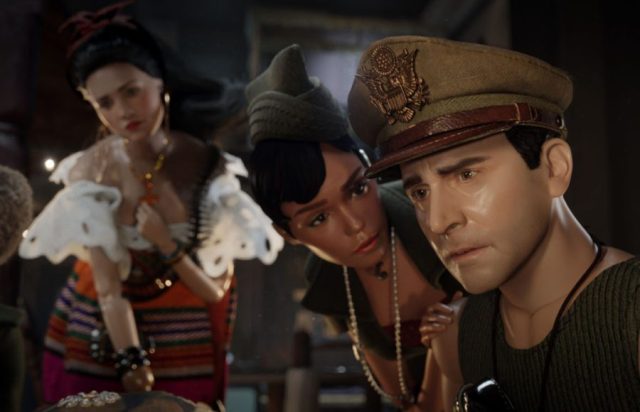 My last experience with Robert Zemeckis was 2016’s forgettable Allied, and in that review I did posit that he was a director treading water since his brief second peak in the 1990’s. Looking back on his filmography I think I may have been a bit harsh on the director, perhaps owing to my less than impressed reaction to Allied, as I note he has had more than one fine effort in last ten years, albeit nothing to match his glory period. This film, my first of 2019 and one that peeked my interest owing to director, lead and premise, is a unique enough project: a dramatized adaptation of Jeff Malmberg’s 2010 documentary Marwencol and the story contained therein. Was Welcome To Marwen a step back in the right direction after Allied, or a step on the road to mediocrity?

After suffering brain damage in a brutal assault, Mark Hogancamp (Steve Carell) finds solace and healing in photographing “Marwen”, a model of a World War II-era Belgian village that he populates with dolls representing himself as a dashing pilot , various women that have had an impact on his life as colourful resistance fighters, and the men who beat him so severely as invading Nazi’s. When a new neighbour (Leslie Mann) moves in across the street Mark is besotted and quickly adds her to his self-made world but, struggling with addiction to pain medication and the imminent sentencing of his attackers, the lines between reality and fantasy begin to blur.

I really want to like Welcome To Marwen, because it has a hell of a lot going for it. The direction is good, the lead is great, the premise is fascinating. But it can’t hold it all together, thanks to a crucial lack of emotional connection between audience and character, and some significant missteps in how the narrative unfolds.

I want to focus on the positives first. Carell has long since proven his chops as an actor outside of the comedy sphere, and Welcome To Marwen is another great performance from him. It might seem strange to say, but Carell seems to excel at playing characters with some manner of mental health problem or lack of filter, be it Michael Scott of The Office, or John du Pont in Foxcatcher, and it is the same again here. Hogancamp is a remarkably damaged individual whose only way to heal is to lose himself in the world he has created, and Carell portrays this wonderfully, spending a large amount of his scenes alone in his rundown house, so it is just essentially just him and the audience. The film has room for some black comedy in the way that Hogancamp interacts with his dolls – most notably the mysterious Deja Thoris (Diane Kruger), the “Witch of Marwen” who is the only one not based on a real person – but it’s mostly deadly serious. Carell has the ability to pull that off, and to make the audience feel for him, it’s only when other characters get involved that things fall apart.

As a portrayal of mental illness and brain damage, Welcome To Marwen crafts a heart-breaking picture. Yes, Hogancamp might have a very decent support network, but he falls to pieces with the wrong stimuli, be it a loud TV or a Nazi doll that bears too much of a resemblance to his attackers. It’s inevitable that such a depiction may be criticised by those who suffer from similar ailments – I believe the term “inspiration porn” has been formed to describe it, as a film meant to make able-bodied people grateful they don’t have such problems – but I wouldn’t say I was inspired by this, merely afflicted with that dull ache that comes with a mixture of pity and discomfort. Zemeckis portrays Higancamp’s photography as his effort to find peace with himself and with the state that his life has become, ahead of a sentencing hearing that will form the third act finale, and while the narrative is rote to an extent, it’s still very followable (and is a bit of a change from  the apparent real-life situation, where Hogancamp did not have an adversity to seeing his work displayed).

I also cannot but mention the film’s treatment of Hogancamp’s fetishising of women’s shoes, an activity that becomes a recurring visual motif and served as the source for the beating meted out to him. I am led to believe that the documentary the film is based off of used this as a sort of late plot twist regards its subject, but Welcome To Marwen is much more straightforward with the topic.

The big selling point of Welcome To Marwen, namely those sequences set within the titular town, are also quite well pulled off. There is a hint of The Secret World Of Walter Mitty to it all of course, as Hogancamp’s real-life issues manifest themselves in the town built in his backyard, but in a good way; it makes for some very entertaining and very inventive sequences, that illustrate well the breakdown of the barrier between the real and unreal in Hogancamp’s mind. Some of it isn’t the subtlest – the Nazi’s in Marwen never die off completely and keep coming back, just as Hogancamp suffers repeated episodes remembering his assault – but it enlivens the narrative brilliantly. 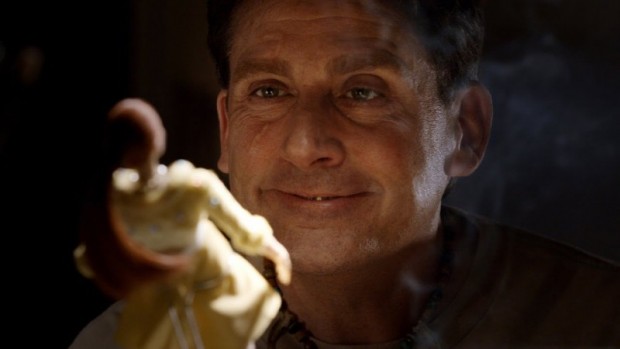 Zemickis can’t keep his main character on the right side of the endearing/creepy line.

Zemeckis seems to delight in that aspect of the production, which is an inevitable altering of the still-life’s the real Hogancamp created. Some have been turned off by the manner in which the actual actors have been re-created in doll form, a sort of mix between the uncanny valley of the directors The Polar Express and the creativity of something like Zemeckis’ Who Framed Roger Rabbit?. I instead would compare this to the likes of Anomalisa in terms of creativity, in the way that the unreality of the dolls and faux stop-motion actually add to the emotion of a scene. For myself, I did not find it creepy or distracting, and could only appreciate the level of detail put into Marwen and its World War II mystique, in its sets, its clothing and the way that Hogancamp goes about fulfilling his artistic desires through it. Zemeckis is an old hand at this now, and the jump between the real world and Marwen is usually done pretty seamlessly.

The film’s depiction of its many female characters I initially viewed very positively, but I acknowledge with greater reflection that there is a blurred line here worth considering. Hogancamp owes his life to the women in his life, be it the waitress who found him on the road after his beating, the Iraq veteran who helped him through physical therapy, his nurse, his co-worker or the owner of the local doll store. There’s a sense without any needed pre-assault flashback that he is a fundamentally decent person whom everyone in his town wants to help, and these women are at the forefront of it. In a film where themes of victim self-blame and street harassment are mixed in with the main narrative, it isn’t hard to tell that Zemeckis has attempted to create something progressive with feminist leanings, but he doesn’t always succeed: most of the women in the film have little to no real characterisation beyond their doe eyed reaction to Hogancamp.

That the two other dolls in Marwen are the new neighbour he develops an unhealthy devotedness to and his favourite porn actress (apparently played by the directors wife; figure that one out) are other issues that speak to the idea that the film exhibits, and perhaps even condones, unhealthy fixation as healing, with Hogancamp literally putting the women in his life on pedestals and treating them as fantastical figures that all happen to be obsessed with his alter ego (as the real women all seem completely sympathetic and supportive of him). At times Mark sexualises these figures – Roberta (Merritt Wever), the doll store owner, wonders why her doll is baring her breasts again as she observes the latest shoot – and embarks on sensationalised art work where his “Captain Hogie” is being whipped by Nazi’s while suspender-wearing dolls prepare to unleash a barrage of machine gun fire. It’s very Grindhouse in a way, indicating a man who is mixing sexual repression with his brain damage and chemical dependence, and that doesn’t paint a great picture.

And that brings us to Nicol, whom Hogancamp puts on the highest pedestal, much to her eventual discomfort. I think the central problem with Welcome To Marwen stems from all this, as the film seems to want you to primarily pity Hogancamp in these interactions, that become increasingly less wholesome and more cringe-worthy as time goes on, but in the age of #metoo and increased visibility on the issues of female subordinance to male sexual and romantic desires, the sight of Nicol getting ever more uncomfortable with Mark’s well-intentioned but still incorrect gaze makes for very unnerving viewing. Zemeckis might think that pure motivations and inevitably happy endings make up for this, but not really, not anymore.

In terms of negatives, there is also the fact that Zemeckis, or perhaps the people behind the film, don’t have the confidence in the audiences’ intelligence that they should have, resulting in some painfully obvious spelling out of the film’s key messages and themes that reeks of test audience changes. I mentioned before the figure of Deja Thoris, and you only need to note the distinctive shade of green in her clothing, the same as the pain medication Mark is swamping, to get the message, yet in a critical third act confrontation this central theme is stated directly, as if the audience are five years old and might not have gotten it (which, to boot, occurs amid a painfully shoed in reference to Back To The Future, with the director wanting to get in some nostalgia bait). It’s rather insulting to be treated as such.

As is the case with many such biopics, the film seeks to avoid blurry conclusions by presenting instead a triumphant closing that one can see coming a mile away, and this is not so good: I often feel stories of this nature have very unearned and unrealistic happy endings, with life-long issues of mental health and brain damage dismissed with a few words and a smile. It isn’t that you don’t want to see justice done by Mark Hogancamp, but this story seems to want to be both a terrible glimpse at a life stolen and a feelgood Oscar-bait exercise, and it just can’t.

While the Marwen sequences prove a great example of the director’s imagination and verve, and Carell continues to showcase his ability to play difficult roles, Welcome To Marwen can’t create something really stand-out from its assembled parts, and that’s a shame: I wanted to like this movie more than I did, but it’s not recommended.

(All images are copyright of Universal Pictures).

This entry was posted in Reviews, TV/Movies and tagged carell, film, movies, reviews, welcome to marwen, zemeckis. Bookmark the permalink.

1 Response to Review: Welcome To Marwen