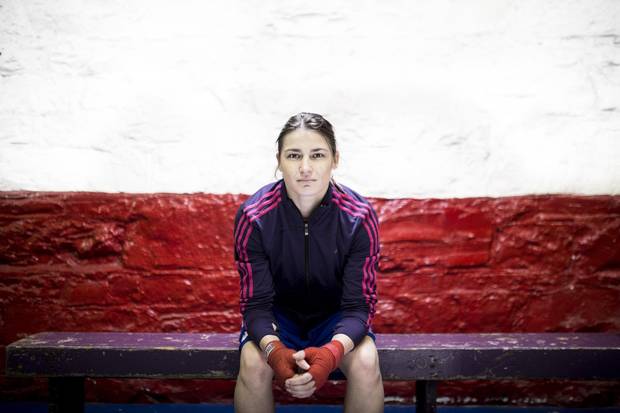 A nation holds its breath…

I remember well where I was when Katie Taylor won Olympic Gold in 2012. With a group of friends and a horde of others from seemingly every strata of society, we watched her win her medal in the Harbourmaster Pub in Dublin’s Docklands. Present where people who seemed to be boxing experts and those who may never have seen a fight before, and plenty, like myself, somewhere in between, all transfixed by this young Wicklow woman, who had suddenly found herself with an entire nation’s worth of expectations on her shoulders.

Such material is, of course, ripe for documentary film-making, and so Katie. Through interviews with the subject herself, her family friends and entourage, director Ross Whitaker aims to craft a character study of this sportswoman, from her first tentative steps into boxing, assisted always by her father Pete, all the way through her Olympic successes and failures, and then to her continuing professional career.

What is it you are really looking for in a documentary of this type? It’s easy to get the facts on Taylor, all you have to do is look up her Wikipedia page. I have no interest in a bland biographical documentary of recordation. Instead, you want to understand something about the subject, beyond the obvious. In this case, as is the case with most sporting documentaries, you want to understand what drives Taylor to keep going despite some heart-rending problems that have come up during her life, and what, if anything, is the specific secret to her success. And, if we are all being honest with ourselves, we also want to know a bit about her family life, and namely her connection with her father/coach Pete Taylor.

On the first score, Katie both delivers and fails. We certainly get a sense of Taylor’s resilience and determination, ingrained in her from a very young age by a sport and boxing mad family. She excelled in numerous athletic avenues, but it was in the “sweet science” that she found her greatest joy, and that’s despite the endemic sexism that almost neutered her career before it had even gotten started. To pretend to be male in order to compete in underage competitions, to becomes, in her teenage years, a practical spokesperson for the sport, to be a primary cause for women’s boxing becoming an Olympic event, these are all things that paint Taylor as a stubborn role model for her gender and her sport.

What creates this obstinance? There is a supportive family structure, for sure. There is a sense of her wanting to break out from traditional and lazy stereotypes of her background and home area. There is the constant prodding and pushing of her father. There are the setbacks, most importantly the 2016 Olympics, which produced a fiery need to fill a gap created by defeat. And there is her religious faith, a quiet yet intense thing, that Katie only really explores in two scenes.

All of them together produces Taylor but perhaps the X-factor is left unrevealed to us. Taylor herself is reserved in interviews and, even now, uncomfortable under the camera, and offers precious little in terms of great insight. But, in comparison to some other Irish sports stars from the combat genre I could name, Taylor is a revelation in and of herself, a quiet, introverted unassuming woman who struggles to make friends when far from home and is the last person who would throw a chair through a bus window.

Whitaker is well-placed to showcase Taylor, with a background in documentaries of a similar type, from Muhammad Ali to Anthony Foley. He’ll never have anyone quite like Taylor to focus on though, which he does through a simple blend of talking head interviews and archive footage. Katie will be well suited to an eventual place on broadcast television. But it still trips along nicely, and serves well enough in its depiction of a woman whose story is on the same stage as Italia 90 or recent Six Nations success in terms of Irish sporting memory.

When it comes to her father, Katie is coy to a frustrating degree. The reason for their post-2012 break-up as a coach/player team is only briefly touched on, and in vague terms: only those already familiar with the details will know what is being discussed, and the kind of impact it would have had on someone as religious and principled as Taylor. The deeper ramifications go unexplored, especially in regards Taylor’s family, and the immediate aftermath is an overly-simplistic account of a fall to a defeat followed by a rise to victory, with some key figures in Taylor’s life, like her 2016 coach Zaur Antia, going un-interviewed. The result is a shallowness in approaching what is, arguably, the defining moment of Taylor’s boxing career, with the filmmakers preferring to cover the topic quickly before moving on to her relationship with American coach Ross Enamait and her professional career.

Taylor’s statistics on that score speak volumes. At time of writing she is 11-0, with five knock-outs, all achieved in a two year period. This section of the documentary is fascinating enough, contrasting the amateur sport sharply with the professional, where fight promotors are as important as coaches in determining a boxers success. Taylor suffers from a combination of being simply too good in the ring – her initial professional fights are embarrassing walkovers, with one competitor asking for a selfie after being completely mauled – being on a pedestal she doesn’t feel especially comfortable with – various unworthy lower tier fighters send her challenges prompting her promotor to remark about one that “the biggest thing she’s done is call you out” – and there remains an endemic sexism to be overcome, with professional women’s boxing still perceived, by some, as bathroom break time in fight cards filled with bigger male bouts. But succeed Taylor does, to the point of hitting top billing in major boxing cards.

Things are left open-ended at the conclusion of Katie. Taylor is a world champion, and likely to be a dominant force in the sport for a few years yet, though all good things must come to an end (What was it Rocky said in Creed? “Time is undefeated”). Her relationship with her father may have a happy ending, though Katie was presumably filmed before the now infamous shooting incident that involved him. If it wasn’t, it makes no mention of it. It doesn’t need to. Its focus is Katie Taylor, and in its depiction of her life the film is somewhat of a success, though it fails to really truly get beneath the surface, frustrated by a subject that doesn’t appear all that interested in any greater revelations or soul searching, and a story that is so by the numbers it could have come from Blake Snyder. But sometimes those stories are worth seeking out and experiencing, and even with its faults Katie is still an inspiring experience. For those interested in such a tale, and there will be plenty, this is recommended.

(All images are copyright of Wildcard Distribution).