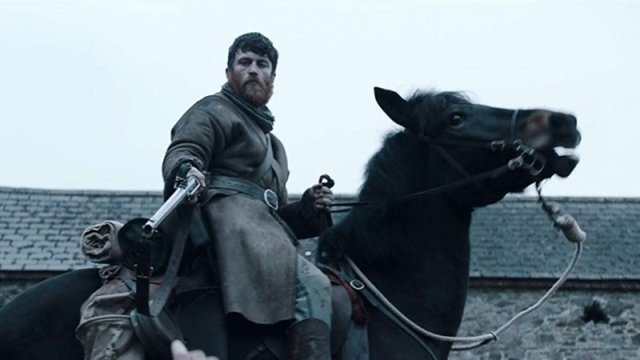 Any regular reader of this site knows that I loves me some Irish history, and while the Great Famine is not something I have ever dedicated an exceptional amount of time too – save for this part of my “Ireland’s Wars” series – as both an Irishman and a student of Irish history, I cannot help but be awe-struck at the enormity of the catastrophe that transpired on this island in the latter half of the 1840’s. To judge our historical identity on the basis of various failed rebellions and one semi-successful revolution has become normal, but in truth their impact on Ireland, in certain ways, was negligible when compared to “an Gorta Mor”.

And yet media about the disaster has been limited, especially the filmed variety. Perhaps it is the scale of what needs to be depicted, or maybe story-tellers simply balk at the misery. Either way, I can’t say I have ever seen a satisfying filmed depiction of the period. And then along came Lance Daly and his Black ‘47, a film where the Famine is focused down into a Death Wish-esque revenge story. Was this an appropriate decision to make, or is Black ‘47 an ill-thought insult to historical memory?

After going AWOL from the Connacht Rangers, Feeney (James Frecheville) returns home to famine afflicted west Ireland, to find most of his family dead of either starvation or unjust English repression. When he embarks on a vengeance fuelled spree of violence, the authorities call upon his old army comrade, disgraced inspector Hannah (Hugo Weaving), alongside unprepared Pope (Freddie Fox), to track him down and bring an end to his one-man rebellion.

Black ‘47 has drawn some comment, and criticism, for the way that the Famine is used as mere backdrop to a rather simplistic action plot-line, and there is some merit in that. Feeney’s quest for revenge and the efforts to bring him to heel are simplistic, and the Famine is largely backdrop. But I feel that there is a certain amount of missing of the point in such criticism. Black ‘47 is not a documentary after all, and the revenge plot has some hidden depths. Through it, Black ‘47 explores the injustice of the English ascendency in Ireland, how it exacerbated the Famine and how the Irish Catholic underclass was invariably pushed into a violent response to seek and protect their inalienable rights. It gives you a whistle-stop tour of the some the worst moments of the event, not least the evictions in the face of the poor tax, the exporting of grain (that even one idealistic English character decides he has to take a stand against), “souperism” and the patronising attempts of the authorities to insist that it’s really the Catholic Irish’s fault.

Feeney is a pretty simple character. He’s quiet, he’s intense, he exudes a lingering sense of concealed anger and seething frustration. He carries a wonderfully portrayed thousand-yard stare, and yet always seems so terribly focused at the same time. And he becomes a suitable cipher for some of the atrocities that occurred during those terrible years, be they evictions, sectarian driven food drives or the continued export of foodstuffs from the island. Feeney encounters them all, from a fairly heart-breaking interaction with what’s left of his family in Ireland to a final bloody denouement. In so doing, he becomes a representation of so many doomed Irish attempts to not be the lower tier of British society: not lacking in spirit, and even fighting skill, but outnumbered, single-minded to a fault and ultimately doomed to a grim end. The presentation of British authority as that occupying force might also be seen as a reflection on more recent wars, made even more plain by an occasionally focus on Feeney’s service in Afghanistan.

Though the majority of the English characters in Black ‘47 are portrayed in a negative light, I cannot bring myself to say that the nationality is treated unfairly, and they are given a fairly resounding sop in Hugo Weaving’s Hannah. His immediate superior Pope characterises the colonial air of “Well, you deserved it” sentiment prevalent among many circles at the time, Jim Broadbent’s Lord in the big house is indifferent to the point of callousness and the Anglo-Irish and RIC members amount to stooges whose guiding star seems to be a pathetic “I was just following orders”. Like the way various antagonists of 12 Years A Slave served more as representations for lines of thought than as individuals, the various people Feeney comes up against represent the different stands of British authority in Ireland at the time.

The overall feeling is less of conscious genocide, as some historians have posited, but of laissez faire taken to a ridiculous and inhumane extreme. Even Stephen Rea’s character, in a rare moment when the façade is dropped, lectures Broadbent’s Lord on the terrible nature of the hopelessness endemic in the Irish peasant lifestyle – one of the only elongated moments of wordplay in the feature – and it stands out as a terrible recitation of British crimes.

The heroic detectives. Not really.

But Hannah is there too, like Feeney a mostly quiet, reserved, yet still capable veteran soldier, hiding his own anger that so memorably comes out in the opening scenes. The two are very much of a kind, and Black ‘47 does well in scenes that emphasise how shared experiences in foreign wars has broken down the class and nationality barriers between the two, leaving a mutual respect and admiration. This is done very much in a quiet, almost silent way, and it’s where Frecheville and Weaving really come to the fore as principals. They are joined by others, not least Broadbent and Rea, the country bumpkin who turns out to be a rather useful translator.

Black ‘47 goes about its business in a well-paced narrative, as Feeney’s quest steadily escalates in a number of really well put together set-pieces, that exhibit inventive ways of differentiating themselves without becoming too, shall we say, titillatingly tawdry (as other films in this general revenge genre often do). The film ties every murderous move to a higher point: the injustice of the RIC, the self-interest of the informer, a sectarian court system, cruel land-agents and the big house society that has worsened the suffering considerably. As time goes on, Feeney becomes more distant and the focus turns to Hannah and company: the trio chasing Feeney are hardly a motley crew, comprising those only out to escape a death sentence, the inexperienced and the idealistic, but we can still get invested in their journey too.

If the film has another higher point to make beyond criticism of the English during the Famine, it’s undoubtedly a love-letter to the Irish language. Indeed, I would classify Black ‘47 as a rallying cry of sort of Irish speakers, most notably in scenes where Feeny adamantly refuses to speak any other language to his enemies. Black ‘47 ties the language to the starving people, and English is spoken only between English characters or when the use of another language would only impede the narrative. That Frencheville apparently was not able to speak a lick of Irish before being cast only makes his performance all the more praise-worthy. Much like last years Pilgrimage, another Irish historical movie that placed the importance of language at its centre, Black ‘47 really works hard at immersing the viewer in another time and place through such things.

If Black ‘47 has a key flaw, it’s that it can’t really find the right balance between a higher examination of the Famine tragedy and the revenge quest of Feeney. Obviously the two are linked and that helps, but Black ‘47 wants to be both an historical action movie and historical judgement, and it’s hard to be both without one taking away from the other. At times Black ‘47 suffocates with its portrayal of hardship, making you wonder why you should really care about Feeney’s journey at all; at others, the more visceral, personal element of the Feeney story makes you want more of that instead of more misery. The film’s ending is also not the best, with a certain whiff of the director and writers not really knowing how they wanted to bring the narrative to a close.

Daly, known mostly for less ambitious Dublin-focused features than this kind of fare, does a decent job behind the camera, largely allowing the Connemara and Wicklow scenery to do the work for him, something that is very much required in a film with the kind of verbal dearth that Black ‘47 has. Much like James Michael McDonagh’s Calvary, the looming hills and extended plains, showcased vividly, create the required air of desolation and hopelessness, as well as a more practical isolation, that really gets the under the skin as you see a depopulated Ireland. Daly was obviously influenced by the Western genre, and one will see elements of Unforgiven or The Searchers throughout, and perhaps a grimmer version of 2015’s Slow West.

Bleakness is the order of the day, and one would be forgiven for shivering in a cinema screen when presented with sequences set in hollowed out villages of skeletal figures trying to just keep warm enough to last another day, or the mud-caked nature of that life. At moments Daly also uses the effect of matte paintings in the distance to really make it clear that we are in a far-off past, one that we only know through the more static kind of visual representation. True visual ingenuity is rarer, like an instance of Feeney interrupting “Souperism” in a windy dark night only lit by hellish torches. What action there is, is limited, with Daly preferring the anticipation of an eventually unseen act to outright blood and guts, something that also helps to elevate the material, and he is able to work the firing rate of weaponry at the time – one shot every 20 seconds if you were very good, but only as long as you keep your powder dry – into the mise en scene of such action very well.

Much like the aforementioned Pilgrimage, Black ‘47 is unlikely to really resonate for too long, either here or abroad. But it is a very decent watch, a more than acceptable effort to bring one of the nation’s defining historical crises to the big screen and make it palatable enough for an audience that isn’t really interested in misery-porn. The cast is decent, the script is limited in scope but effective when focused on, and Daly directs well. Some tonal issues and an ill-thought ending detract, but Black ‘47 is a film that I do think does a great service to the cause of historical drama and representations of Irish history, Recommended.

(All images are copyright of Element Pictures).