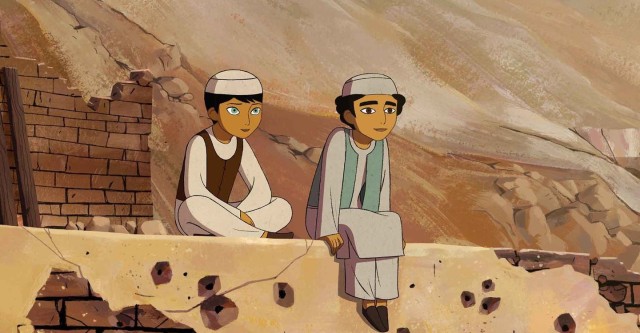 Another year, another festival, another animated effort. It was back in 2015 that I was given the chance to see Nora Twomey’s Song Of The Sea, and I found it an entrancing tale of sibling love, loss, depression and exploration, beautifully acted and beautifully animated by Cartoon Saloon. The film showcased a maturity in its animation and in its story, without sacrificing on the kind of vivid and fantastical story-telling that is aimed primarily at children.

But this, this is something significantly darker. Deborah Ellis’ novel tells a grim tale at times, of gender inequality and a desperate fight for survival, but Cartoon Saloon, and Nora Twomey again, have tackled serious topics before, doing so with tact and verve. More importantly, they have done so with a searing honesty. If The Breadwinner is to be an animated adaptation, I can think of no other studio and director I would rather have be responsible. I caught a screening of The Breadwinner as part of the Audi Dublin International Film Festival.

In Taliban-controlled Afghanistan, the family of young Parvana (Saara Chaudry) struggle in an unjust society on the brink of invasion. When her father is arrested on a trumped up charge, Parvana is forced to cut her hair and adopt the clothes of a boy in order to insure the survival of her mother, sister and younger brother. At first doing so cautiously, Parvana soon exults in the freedom her ruse allows her, but in the streets of Kabul danger and discovery are never far away.

It says something about this film, the source material and the director/studio, that this showing of it was able to sell out Screen 17 of Cineworld Dublin, which, and correct if I’m wrong, stands to be the biggest screen in Ireland now that the Savoy is bowing to the inevitable with its fabled Screen 1. A packed house took in The Breadwinner and they, and I, were not disappointed. Cartoon Saloon can call it three for three after The Book Of Kells and Song Of The Sea.

Right from the off, The Breadwinner frames itself as a look at two different views of Afghanistan, the one that is, and the one that could be, one steeped in harsh, painful reality, and one steeped in fantastical freedom and idealism. With an engaging tale within a tale narrative, The Breadwinner ebbs and flows with the story that it has to tell, maintaining its grim look at the unfortunate life of women under the rule of Taliban while also giving itself the breathing room to tell what is essentially an eastern-style fairy-tale.

It will be hard for anyone to see the depiction of female life in Kabul and not feel a little sick, a little upset, a little angry. In the opening scenes, a father does something inherently forbidden in Taliban society, and attempts to educate his daughter; when a young firebrand of the political movement gets in his face, it’s a sure sign that trouble is to follow. Idrees (Noorin Gulamgaus) might only be in three scenes, but he’s still a remarkably affecting villain, the second wave of the Taliban revolution, an angry young man exulting in the power granted to him without having to have fought for it in anyway.

But I might be getting distracted by the intensity of those opening scenes in terms of introducing you to their world of The Breadwinner. The fantasy deserves some consideration to, as Parshava begins telling her story-within-a-story, an off-the-cuff quest of a young boy to save his village by getting some seeds from the evil Elephant King. Animated in a different style to the rest of the film, this story provides the opportunity for some badly-needed levity – sometimes from something as simple as the main character repeating the words of the narrating Parshava for example – in a story otherwise surrounded by darkness. Even this kind of thing can’t escape the shadow, and lines up with the central narrative neatly by the conclusion.

The Breadwinner’s story within a story is one of its strongest elements.

In the real world, Parshava has to risk life and limb in order to do something as simple as purchase basic necessities for her female family members, and The Breadwinner excels at showcasing Parshava’s trembling efforts to do this as herself, and then her trembling efforts to do this as “Aatish” and then that wonderful moment of transformation, as she realises the freedom that she now enjoys when she is perceived as being of the male gender. The wrathful glances from those on the street turn to uncaring, the shopkeepers who refuse to serve her suddenly become friendly and, wonder of wonders, she suddenly has the chance to actually earn money of her own. This sudden introduction to activity, respect and agency usually denied to her sex is a great cipher to showcase the inequality of Afghanistan. One of the film’s stated messages is that women shouldn’t have to hide if their appearance offends men, the men should just stop looking. But then Parshava finds herself in a world where no one is looking at her at all.

But, at the same moment, Parshava is weighed down with additional responsibilities. The film is titled The Breadwinner after all, and there are three hungry mouths to feed, not to mention that one of them, her mother, appears to be entering a catatonic end state of despair, having been beaten severely for the crime of trying to find out if her jailed husband is still alive. This shade of a “loss of innocence” theme doesn’t ever become too weighty within the course of The Breadwinner, but provides a powerful motivating context to Parshava’s desperate venture, and a suitable reason for her to become additionally angry at the state of her circumstances, clinging to childish things through her fairy-tale while being forced to grow up all too fast. And it isn’t a case that characterless women meekly accept the beatings and dominance of men: The Breadwinner, in the full course of its running time, shows you why Parshava’s mother is the person she is.

The film propels itself towards a tension-filled climax, where multiple ticking clocks appear to be going off at once: the danger of Parshava being discovered; her efforts to find out if her father is even alive, requiring her to earn enough money to enact a bribe; the continuing hints that the country is about to be attacked (never identified as the USA, but who else could it be?); and, in Parshava’s fairy tale, the young boy’s gathering of magical items and his march to the Elephant King’s mountain fastness.

In all these things, The Breadwinner is at pains to show that humanity, so lacking in the opening sections, does still exist in Afghanistan, and demonstrations of that humanity are what should define the country. Parshava gets help in her quest from unexpected places, like an older man mourning his recently killed wife, or another girl pretending to be a boy who dreams of seeing the sea, and even her sister that she routinely bickers with. By the end of the film, it becomes clear that the inner message is one of redemption for the country’s people and rejection of its more violent aspects, seen in both examples of Afghan women standing up for themselves in the face of patriarchal oppression and in the simple love between child and parent.

As stated, The Breadwinner jumps between two different animation styles in its two different narratives. The real world of Kabul has a more traditional animation style, with simple colours and simple depictions, that is a good fit for the only occasionally colourful surrounds of the dusty Taliban-ruled country. When Parshava and her friend find coloured sweets on a factory floor, it’s so vibrant in the surrounds that it only calls attention to this fact. But what The Breadwinner, in these sections, lacks in colour it makes up for in detail: in the embossed plate that the family eats its meals off of every day, in the expertly portrayed guns that the murderous Taliban sycophants so carelessly let off at times; in the letters that Parshava reads to illiterate men as a side-business, that frequently contain heart-breaking news.

And then there is the fairy tale, where the film moves into cut out-style animation, of overlaid images of a more basic 2D style, traditionally crafted. Here, the opportunities for colours abound, and Twomey takes full advantage, with a showcase of jewels and villainous tigers and wailing villagers and vengeful skeleton men, before a final confrontation with the fearsome Elephant King during a terrible storm, that is expertly intermingled with the storm of war in the “real” sections. The fairy tale has an ultimately sad point to the story it is telling, but that shouldn’t take away from how cleverly it allows a greater depth of expression in what could otherwise have been a very drab film.

While it will certainly lack the localised pull of The Book Of Kells or Song Of The Sea, The Breadwinner may be Cartoon Saloon’s finest hour, a mature, thoughtful animation, that pulls few punches in its depiction of theocratical dictatorship, abuse of women and the defilement of childhood, yet somehow successfully meshing this with some more child-friendly material. Never patronising, rarely bland, The Breadwinner is another fine example of the kind of stuff that Irish animation studios can create, which remains important in a genre awash with the unexceptional. Highly recommended.

(All images are copyright of Elevation Pictures and StudioCanal).

This entry was posted in Reviews, TV/Movies and tagged adiff, film, reviews, the breadwinner, twomey. Bookmark the permalink.