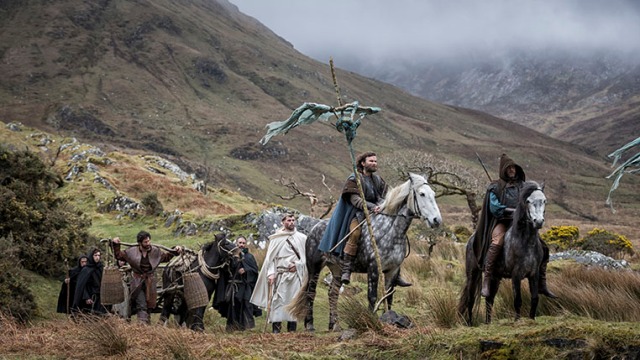 In a confluence of culture and language, a party of monks takes a trip to Waterford.

Ireland in the early 13th century was a fascinating, and very under-appreciated, historical period. Our understanding of what the situation in Ireland was like at that time is simplistic, in my opinion. Some people tend to think that Ireland was conquered by the “English” in 1169, and was oppressed from then to 1922, but the truth is far more complex. It took centuries for Anglo-Norman dominance over Ireland to be made total – indeed, they weren’t even Anglo-Normans when they were finished – and during that process Ireland was very much the wild west of the day, the edge of civilisation, where law and order extended only as far as the walls of a motte and bailey. There and then, Ireland was a potent, competing and often violent mix of Gaelic, Norman, Norse and Catholic cultures. And it is this world that director Brendan Muldowney, with writer Jamie Hannigan, decided to set his tale of clerical questing. The opportunities here for spectacular story-telling are immense, as are the risks of sentimentality and overly-violent bloodbath film-making. With a surprisingly decent central cast and the backing of the IFB and BAI, was Pilgrimage another Irish film triumph, or a forgettable trudge through the realm of “historical action”?

Ireland, 1209: A Cistercian Monk (Stanley Weber) arrives at an isolated monastery, tasked with transporting a holy relic from there to Rome. Among those going with him on the journey south will be young monk Diarmuid (Tom Holland) and a mute stranger with a violent past (Jon Bernthal). Along the way, they face many dangers, not least the conflict between a rampaging Irish warband and a group of Norman warriors, led by the cruel Raymond (Richard Armitage).

Violence begets violence, would seem to be one of the primary messages of Pilgrimage, which opens with a first century stoning shown in brutal detail, a moment that sets off an historical chain reaction that ends with three different factions killing each other a millennium later, nominally over a “relic” of the first killing. But in reality, they’re killing each other over something that is both grander and lesser: faith, be it in a higher power, or in your own power.

The cipher for this story is Tom Holland’s Diarmuid, a naïve young novice monk who has never left the bare scrap of land his west-coast monastery clings to – exactly the reason he needs to go on the journey, his Master muses thoughtfully – and who imbues the larger story with a coming-of-age plot. He acts as both an audience surrogate and driving moral force of the film, unless his morals get stripped away by what he is witnessing around him. It’s a “loss of innocence” narrative in many ways, and Holland is suited for it, adding something quite important to the “quest” plot, in a quiet and mostly understated performance, absent of the peppy charm from Spider-Man: Homecoming, but no less endearing in many ways.

Alongside him is Jon Bernthal, known only as “the Mute”. The character’s backstory is only hinted at, but is largely predictable when it comes right down to it, and in many ways Bernthal’s presence seems largely to be just so the filmmakers can have a suitable person to start swinging swords in a violent manner when the time calls. Bernthal does try to make the absolute most of what he is given here, but he isn’t quite good enough an actor to make a tour de force out of such a part. Much like some of the Norman characters, the Mute has a kind of agnostic quality to him, combined with some past trauma undoubtedly connected to the Crusades, which does add significantly to a character in need of such rounding out. The Mute serves as an interesting addendum to the action, but the film works better when it focuses on Diarmuid and Geraldus, the third part in the main cast trinity, a monk whose creeping motivations and true faith serve to keep things interesting well into the third act, a representation of the slippery character of the Church in those days, ably played by the unknown Weber.

In Pilgrimage, and in the setting, the Catholic religion comes smack up against ancient mysticism, and struggles to get by. There are constant references to the Holy War being waged to the far east, but in the far west the Church isn’t exactly stamping its authority either. The Irish monks are wary of fairy forts and doors, mush to the disgust of Geraldus, most notably in a scene involving whether to take water from a stream supposedly cursed by Gaelic legend. This could easily be portrayed in a twee, eye-rolley manner, but Pilgrimage takes a different tack, with the older Gaelic culture a vague, shadowy force that indicates little but doom for the Catholics trudging through the countryside.

Violence begetted by violence is never far away in Pilgrimage.

It comes down to faith for many, such as John Lynch’s excellent senior monk, and even Diarmuid’s quieter, inexperienced kind. But for others, like Geraldus, it’s terror, a terror of what might be coming in the afterlife, and what might befall anyone who takes a wrong step in the kind of world that he inhabits. The Church is a distant power in Pilgrimage, but a power nonetheless. Part of what makes Geraldus so interesting is in seeing someone with first-hand experience of the power of the Church deal with being in a land where that power barely exists. In this world, the Church is not just a thing to be revered and to have faith placed in, it’s something to obey and be subservient to. As Geraldus himself puts it, in reference to someone burned at the stake for heresy, “He didn’t lose his faith in the church, he lost his fear of it”.

It’s a suitable footnote to the situation in Ireland today in some respects, to remember that there was a time when the Church had the power of life and death over its subjects (and that’s what they were). More agnostic characters, like Richard Armitage’s fearsome Raymond, a Norman knight with little time for relics beyond the personal gain he can get from them, have no fear of what the Church represents at all, but in not so empowering a way: instead, perhaps having spent too long on the frontier of civilisation, they have abandoned any respect for law and order in its entirety.

But beyond effective commentary on the Catholic Church and where it has been in its grimy, sordid past, there is the focus on Ireland in 1209, the “end of the world” as Geraldus calls it, a frontier defined by opposing languages. Pilgrimage goes all-in on this concept: the Irish characters speak Irish, the Normans speak French, clerics use Latin and Italian, and it’s only when they are talking to each other that English appears. This means a large amount of the film is subtitled, a risky move, as it essentially destroys Pilgrimage’s ability to attract a large percentage of its potential audience, but the gain in authenticity is more than worth it. It’s really fascinating to see Irish, French and English combine in such a production, and gives you a taste of what things must have been like in the time and setting depicted.

The cinematography too embraces the idea that we are seeing the frontier of civilisation and the very edge of the world. While not exactly dark in tone, Muldowney seeks to frame this Ireland as a grim and uninviting place in many respects, a sort of green desert if I may be allowed the description, where the rainy, windswept vistas of rolling hills and foreboding forests combine to produce a sense of dread in every footfall and nervous glance. A good comparison could be drawn to films like Apocalypse Now and its Heart Of Darkness inspiration, of a long trip into a hostile and deadly environment, where the mental danger is as tangible as the physical. One Norman leaders waxes lyrical that the Irish are hard to defeat as they have a tendency to run into inaccessible bogs and woods at every opportunity, and Pilgrimage gives you a front-row seat to such “wood-kerne” tactics, that conspire to make this emerald isle considerably less friendly than it is traditionally depicted, instead being a place where paths of “bad reputation” outnumber the ones of any other opinion. The filming was actually split between Ireland and the Ardennes forest (Pilgrimage is actually classified as a Belgian film on IMDB, despite being mostly financed by Irish entities, casted and crewed mostly by Irish people and, of course, set and partially filmed in Ireland), and they are suitable locations for the sort of suffocating feel of isolation and encroaching barbarianism that Pilgrimage displays.

The action scenes are actually fairly rare here, with the exception of an ambush mid-stream and a blood-strewn finale. The violence is certainly of the Game Of Thrones-style with an emphasis on sweeping blows of weapons that have a tendency to lodge in the brain. Pilgrimage generally has a lot to thank Game Of Thrones for I think, especially in terms of how it has opened up the possibility of Ireland being used as a filming location for such efforts, something that did not really happen before, excepting Braveheart, in this country.

Other parts of the production also stand-up, for the most part. The score, from Stephen McKeon, is surprisingly effective, usually the first thing to get short-changed in such productions, the choral monk chanting an especially nice addition. The script could do with a bit more confidence in itself at times, especially in the concept of “show, don’t tell”, with some of Geraldus’ lines, especially near the conclusion, being almost laughably expository, but is generally quite strong. Welcome are numerous references to issues of the day, like the conflict between King John and his distant Irish subjects, the denial of Ireland being a peaceful paradise pre-1169 and of course the constant overarching shadow of the Crusades. And the film is edited and paced with skill too, restraining itself from being a constant bloodbath like other films would be, and instead being happy limiting itself to brief small-scale clashes.

While Pilgrimage is destined to be a “straight-to-streaming” option for the most part, having only a very limited theatrical run in Ireland (thanks IFI!) it’s still very much worth checking out. Leaving aside some of its deficiencies, like the script problems, some of the acting and a complete lack of female roles, there is a wealth of stuff to enjoy here: Tom Holland and Stanley Weber’s performances, the cinematography that recreates the era, and the general setting in terms of location and language, the kind of multi-lingual experience that you won’t rightly find anywhere else. Moreover, it’ a confidently-made Irish production that speaks well of our film-making community’s capacity to reach beyond the typical, and one that deserves more viewers than it is likely to get in cinemas. Highly recommended.

(All images are copyright of Falcon Films and RLJ Entertainment).