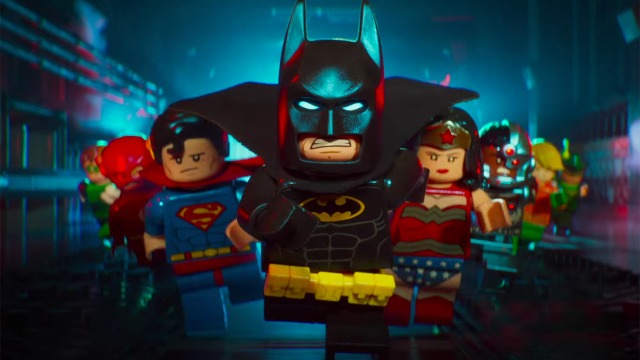 The Caped Crusader (Will Arnett) is at a loss: despite his universally praised badassery and success at foiling the likes of the Joker (Zach Galifianakis) he still feels an emptiness in his life that not even faithful Alfred (Ralph Fiennes) can fill. When new Police Commissioner Barbara Gordon (Rosario Dawson) essentially declares Gotham doesn’t need vigilantes, Batman is launched on a quest to prove his worth and stop the Joker again, this time with his newly adopted son, Richard Grayson (Michael Cera), in tow.

If there is one property out there ripe for a good parody, it’s Batman, a superhero who, like no other, has entered into the popular consciousness in the modern age as a grim, serious and altogether humourless character, whether it be Christian Bale, Ben Affleck or David Mazouz. Only in animation has a lighter side of the Bat come out in things like The Brave And The Bold, but it is only with The Lego Batman Movie, a follow-up to the riotously successful Lego Movie of 2014, that we have actually reached the territory of all-out parody, perhaps last traversed properly with Joel Schumacher’s Batman And Robin in 1997.

And a great send-up it is. Lego Batman takes every cast-iron trait of the Dark Knight and plays merry havoc with it: the gargantuan Batcave, the playboy mystique of Bruce Wayne, his effortless defeat of a succession of awful villains (the obscurity of which is nodded to brilliantly as the Joker describes the Condiment King as “worth a Google”), his many toys and that almost infantile sense of self-darkness. And that’s before the film really kicks into gear, becoming as much a love letter to Lego as it is to the Batman mythos.

The creativity on display, from a visual stand-point, is as enthralling as it was a few years ago. As soon as Lego Batman breaks out of the superhero genre and into a general free-for-all of fantastical heroes and villains – not to spoil too much , but a certain flaming eyeball voiced by Jermaine Clement provides a wonderful sideshow to the main action – every frame is filled up with more and more well-constructed creations, that makes Lego Batman less of a CGI affair and more stop-motion.

But the film would be nothing if not for the actual characters and the talent voicing them. Arnett’s takes his well-honed tongue-in-cheek parody of Batman from the Lego Movie and carries on here, and God knows his throat must have been in bits by the time he was through. But it’s the people around him who steal the show more so: Michael Cera’ delightfully enthusiastic Robin, Rosario Dawson’s no-nonsense Batgirl (“Can I call you Batboy then?” she justifiably muses) and Ralph Fiennes all-business butler. Galifianakis is great as the easily wounded Joker, who despairs that Batman denies the depth of their “relationship” and the horde of other VA, voicing every hero and villain that DC van muster up from the depths of their back catalogues, is also putting in a good shift.

While the emotional beats of the story are nothing to get too worked up about, and the humour is off the nod nod wink wink variety tailor made for the nerd community at larger, it still works within those confines, a real homage to creation and to the source material being amply cherry-picked from. Previous versions of the character are easily mocked (Alfred remembers “that time with the parade and the Prince music”) and the conceit of the lonely billionaire playboy too, who spends his nights eating reheated lobster thermidor and playing electric guitar in the Batcave.

It lacks a certain punch, but is still fun, and visually stunning in a manner that builds on the manic energy of The Lego Movie. For that, Lego Batman is a definite recommend. 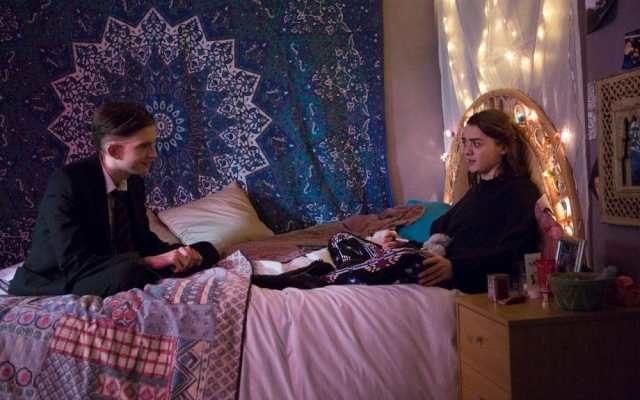 Teenaged Tom (Bill Milner) major worries mostly involve passing his exams, avoiding being jumped in his run-down council estate and his awkward crush on fellow student Lucy (Maisie Williams). But after witnessing a brutal assault on Lucy and receiving an unlikely wound to his head, Tom begins displaying abnormal powers over electronics, that he soon puts to use as a digital vigilante.

Looking at the promotional material for Netflix’ latest original movie, I immediately called to mind Attack The Block, Joe Cornish’s excellent sci-fi adventure set in similar surroundings. But iBoy, despite the rather bad title and young cast, is a decidedly darker tale than Attack The Block in many ways, with a better comparison being with Daniel Barber’s Harry Brown. Both films are essentially following the archetypical superhero narrative within this poor urban environment, just from opposite ends of the age spectrum, and both deal with the crushing theme of modern male youths easy slip into animalistic behaviour when little in the way of positive opportunity is around.

As that kind of superhero origin story, iBoy is nothing particularly special in terms of the plot beats, and even as a vigilante film it isn’t going to set the world on fire (even though there is something to be said for how the film takes the modern ages dominant form of technological advancement and turns it into a superpower genesis device, not unlike how radiation had such a role in the 50’s and 60’s). But the setting saves things somewhat, the poorer parts of rundown London an excellent setting for the story presented here, as the criminal underworld is brought to life in a way that mimics, and occasionally even beats, the lurid and haunting cinematography of Welcome To The Punch or the aforementioned Attack The Block. We’ve had so many superhumans on-screen recently that aren’t all that easy to relate to, either because they are already exceptional people – billionaires, demi-gods, miracle surgeons, etc – or because, in the case of people like Peter Parker, we’ve seen so much of them it’s hard to stay focused.

Here is a really in-depth warts-and-all depiction of a teenage superhero, balancing his after-hours vigilante activities with his awkward courting of the girl he likes, occasional drug use and the visceral reality of secondary school life, where the bullies are less comic and more brutal. Those seeking the Marvel recipe of witty one-liners every 15 seconds will be disappointed here, as the film matches the grim traits of the author of the original source material, Kevin Brooks, whose The Bunker Diary more recently strayed the line between “Young Adult” and torture porn. Milner, while not exactly being relatable, and indeed obligated to not talk all that much in the course of iBoy, can be a little hard to engage with, but still manages to draw our sympathy with a well-presented, but subtle, sense of justice without being over-wrought. The contained nature of the narrative, which barely strays outside that council estate, helps focus our attention on the characters: no planet-ending threats are to be seen, and even Tom’s more outrageous actions appear to get little notice by the wider world.

The key to a proper vigilante film is to explore how the person carrying out the vigilantism is affected by what they do. If you just want to be a bland Death Wish style adventure, the answer will be “very little”, but iBoy is a bit smarter than that, with Tom propelled by events as much as he shapes them, very quickly getting over his head, director Adam Randall adequately exploring the knock-on effects that occur when such an unlikely outside source upsets the established social and criminal order. Suffice to say, it isn’t all dastardly villains getting their comeuppance and the council estate being wiped clean of crime – Harry Brown’s one serious flaw.

Milner is matched by Maisie Williams’ Lucy, the Game Of Thrones veteran easily the most famous person in the cast, though I wasn’t sure how to feel about her character’s role in the story. After being gang-raped by some local hoodlums, she spends the majority of the film in her bedroom trying to work up the courage to go outside, and it is only in the finale that she begins to exert some agency on the story. If vigilante films are often, justifiably, accused of being semi-fascistic fairy tales where female characters exist primarily for sexual and hero reward reasons, then iBoy probably doesn’t do enough to buck the trend, even if Williams plays Lucy with the proper sense of hurt, outrage and general nuance: a late in the film monologue when facing her attackers oozes with tangible rage and frustration. She and Milner light up the screen, despite the grim surrounds, whenever they are in the same frame, most notably in a dialogue-less moment where Lucy exchanges text messages with Tom’s titular alter-ego.

iBoy also delivers in its supporting cast, with a plethora of young and never seen before seen cast members giving it all they’ve got, most notably Jordan Bolger as Tom’s friend/gang climber and Charley Palmer Rothwell as the brutal frontman of the worst of the local hoodlums. And, just when required, the veterans are around to give the film the right sense of gravitas and experience, with Miranda Richardson as Tom’s grandmother and Rory Kinnear in a suitably delicious act three role as the piece’s criminal mastermind.

Lacking the scope or all-out star power of other superhero films, and with a setting that may not attract the notice of many outside the United Kingdom, it’s unlikely that iBoy will stay very long in the popular consciousness, which is a shame really, because it works as a superhero film, as a vigilante action movie, as a relationship drama, albeit that it can’t quite get any of those three branches completely right. Milner establishes himself quite well here, and Williams shouldn’t have any problems evolving her career when Westeros finally closes its doors. In the meantime, I recommend this, an engaging Netflix original.

(All images are copyright of Warner Bros. Pictures and Netflix).

2 Responses to Review: The Lego Batman Movie And iBoy