We have to start somewhere, so let’s start right at the beginning. The other week I outlined my checklist, divided into five sections, the first being “Meeting The Villain”[i].

A wise man once said “You only get to make one first impression”[ii], and he was right. It doesn’t matter what it is in film – the hero, the villain, the key plot point, the main theme: if you mess up the introduction, you might never get the audience back. When it comes to “Meeting The Villain”, we’re going to be looking at every aspect of that meeting: the exact introduction, the distinctions of the villain, their defining statements and early villainous actions.

Here’s part one of that, summed up thusly:

Introduction – The moment that the villain is introduced to us must be noteworthy in some way, to single out this individual.

The key thing about what I am going to talk about in this post is that the moment of introduction is not as much about the actual villain, as it is about the scene that is happening when they are introduced. The things that are important here are what the exact point in the narrative you are at, what other players are in the frame and what the scene itself is trying to accomplish.

Obviously, my preference is for villains to be introduced early, and I’m a big believe in the bad guy making her/her appearance before the hero character, as several of the examples I will talk about later will attest. But there’s no real need for it, as long as the introduction scene happens relatively early, that is if you want your antagonist character to have a suitably important role in the unfolding story. Anything past the first ten minutes is a serious mis-step as far as I am concerned, a sure sign that whoever is behind the story being told is treating their villain as an afterthought.

-Who else is there

-The point of the scene

It’s important that the scene where the villain first appears is about them in some way of course, but it doesn’t have to be about them directly. As above, what the audience is being pulled towards is also a major thing: is the antagonist starting out as a small fish in a big pond, or are they at the centre of their own universe? Are they a bit player struggling for the limelight, or are they letting others bask in their reflected glory? In other words, do they come off as important in their introduction, or unimportant? Both can work, depending on the exact manner of the story being told, but you have to be careful with him. You could portray the villain as too powerful right from the off, straining suspension of disbelief that anyone could defeat them. Or you might showcase them as too unimportant and insignificant, straining suspension of disbelief that they would ever be an adequate threat to the hero.

Talking about this is one thing, but let’s look at some examples.[iii]

Yes, Darth Vader. Think “movie villain”, and it’s rare you’ll find someone who doesn’t have an image of the Dark Lord of the Sith in their heads almost immediately. The opening scenes of Star Wars Episode IV: A New Hope are justifiably legendary, but beyond that utterly enthralling sequence of the Star Destroyer gliding over the entire frame and our first glimpses of R2-D2 and C-3PO is Darth Vader’s introduction.

The point in the narrative is fine: Vader will be only the third “named” character seen, just a few minutes in. Who else is present? Just nobodies, Stormtroopers and some rebel corpses, once the droids have fled, leaving the black clad Sith Lord the ability to capture the moment easily. And the point of the scene is perfectly set-up for Vader’s entrance: we witness a scrappy, chaotic gunfight in a narrow corridor where the Imperial troops were literally stumbling over each other to clear a path, before the rebels were obliged to scatter backwards in a disorganised manner. The scene is set for someone in command, with authority, with presence, with that vitally important sense of order to arrive and take over. And so he does, wordlessly, but with no little amount of menace in every movement. You don’t know his name, you don’t know his role, but you know that he is someone to be feared.

–“No wonder they call him…”

Yeah, we’re going down the obvious route, but The Dark Knight would have been nothing without Heath Ledger’s final gift to the film-watching community, his magnificent portrayal of the Joker. In the opening scene of Nolan’s masterpiece, the Joker, incognito, leads a raid on a mafia-owned bank, gunning down his compatriots one by one. The point in the narrative is fine, it being the first scene, and since it’s a sequel, several of the central characters are already familiar to the audience anyway: Nolan understood that focusing on the villain first was important, something a lot of sequel directors don’t get. The others present are nameless henchmen easily dispatched, and the bank manager, a slight step up from the Star Wars example. This works with the point of the scene, which to showcase both the Joker’s capability – in how he ruthlessly plays his henchmen off against each other, and kills them himself without a moment’s hesitation – and his warped mindset. The bank manager, played by recognisable character actor William Fichtner, adds a little bit to the scene as this maligned voice of reason who might as well be talking to a wall when it comes to the Joker. This sets him up admirably, and we’ll come back to it at another point.

–“My grandmother had an island.”

Skyfall plays it a lot differently than the other two examples in a lot of ways, but still does s great job introducing its antagonist, the imminently threatening Raoul Silva. We’re a fair bit into the narrative of Skyfall here, Silva first appearing onscreen at the hour and ten mark, to offer the above-linked monologue to a restrained James Bond. The length of time it took to get here isn’t too much of a problem since Skyfall made its first act into a mystery revolving around Silva’s identity: the climax of Bond’s investigation comes here. This relationship is to be of two very similar men of similar backgrounds but of diverging paths clashing over M, therefore it is fitting that only the two of them share the scene. And the point of the scene is to act as an introduction to Silva’ twisted genius: his ability to plan, his way with words, his intimidating manner: this one on one interview accomplishes that.

That’s three great examples of the introductory villain scene. Now, how about some not so great ones?

Yeah, that’s right, I don’t like Darth Maul. I mean, I did when I first watched the film. He had the cool red and black colour, the horns and that double-bladed lightsaber. Also, I was 11. This Lego movie scene probably captures what they were going for with Maul more accurately. I’m a bit older, and wiser, now, and I can tell you that Darth Maul sucks.[iv] His introduction comes way too late in the film, without the benefits of time that Skyfall had to set up the identity of the villain. He’s just a scary looking addendum to an in-progress meeting between hologram Sidious and the racist aliens. And the point of the scene, like so much of Episode I, is a ham-fisted effort to propel the plot forward without doing the requisite work of subtle plot exposition and effective characterisation. I’ll be back to Maul again at some point. 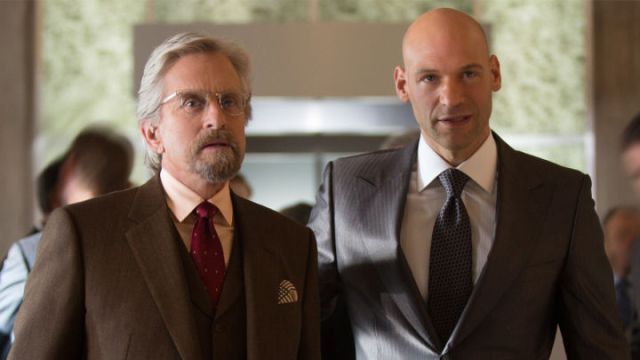 Here’s the first of what I am sure will be many “Marvel Cinematic Universe” entries on the wrong side of my analysis. We start with Ant-Man, and Darren Cross, aka, “Yellowjacket”, played by Corey Stoll. The problem with this introduction isn’t its place in the narrative, though it is a tad late. It’s who else is in the scene, and the larger point that the scene is trying to make. In the moment that we are first introduced to Yellowjacket, the scene is more about Michael Douglas’ Hank Pym and Evangeline Lilly’s Hope Van Diem, the father and daughter pair whose apparent estrangement is a major plot point in the first act before it is later revealed to be at least a partial deception. Cross is just a third wheel on that. The next scene is one he will command of course, but that first impression is one marred by the scenes focus on Pym and Van Diem. Cross’ very first line is a fawning acknowledgement of another character’s presence. Indeed, it should come as no surprise that, when filmed, this wasn’t meant to be Cross’ first scene.

–“I knew we shouldn’t have slept together…”[vi] 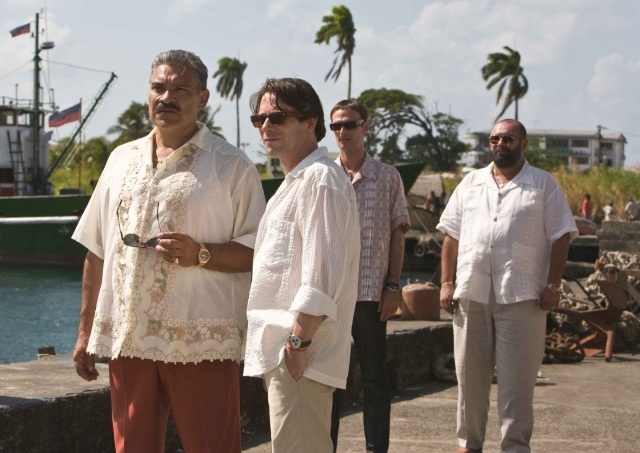 Ah, Quantum Of Solace, the awkward middle-child of the Craig-era Bond movies, after the sublime reboot that was Casino Royale and before the rip-roaring return to traditional form that was Skyfall. Our villain for this all too rushed endeavour is Mathieu Amalric’s Dominic Greene, and you better believe I’m going to come back to this weasly excuse for an antagonist again. Focusing just on the scene where he first appears, well, it comes late in the narrative, and without the air of mystery that Skyfall had: Greene is just the latest human face on the larger “Quantum” threat. The scene is dominated by Olga Kurylenko’s Camille, screaming at the comparatively meek Greene, whose chance to establish himself as the kind of man you can buy going up against James Bond – who has already been in a car chase and a rooftop chase by now – goes up in smoke. Indeed, the circumstances of this scene do not even help you to reliably know that Greene is the bad guy of the film: the more physically impressive general who turns up shortly fits the bill a little bit better.

In summation, the introductory scene of the villain is hard to mess up, something that we will explore as a general constant in terms of the larger introduction traits to come in this series. That makes it all the more disappointing when that introductory scene is bad and fails to welcome the antagonist to the story in the proper way. With correct narrative placement, character direction and depth, the bad guys can start being bad with the best possible foundation. But aside from the scene that they are in, they also need some distinction of their own, and that is what we will talk about next.

[i] I say villain here, and in this post series, we are going to be looking almost entirely at primary villains, as judged by myself. Sometimes this is clear, sometimes it’s not, but I’m just going by common sense.

[ii] Then again, as Lemony Snickett said ““I don’t know if you’ve ever noticed this, but first impressions are often entirely wrong.” Sometimes, after a bad introduction, a villain character can be brought back to a good level of quality. Sometimes. I don’t claim to have bulletproof arguments here, only generalities.

[iii] If the Youtube videos here break down at some point, well, these things happen. In here, screenshots are better.

[iv] Someone is straight away going to say that Darth Sidious is the real villain of Episode I, but that’s wrong. Sidious is barely involved in the story as a shadowy figure (a menacing phantom you might say) while Maul has a more direct impact. If Maul isn’t the real bad guy, then Nute Gunray has a better shout than Sidious really (God help us).

[v] An intro scene so poor nobody has ever out it on Youtube.

[vi] In lieu of the actual scene, enjoy this, only slightly more wooden, cutscene from the Quantum Of Solace video game.

2 Responses to The Villain Checklist: Introduction