All that’s missing is the trenchcoat…

OK, Zemeckis has had his share of duds, critically and commercially (and creepily, The Polar Express is haunting) and he very much has struck me as a director who hit his zenith in the 80’s, briefly got close to it again in the 90’s, and has since been treading water with a succession of poor or forgettable projects. But the man can still direct, and look at the pair he has to direct here, and in just the kind of story to make lots of hay with: a tense World War Two spy thriller whose premise and setting easily evokes shades of Bogart and Bergman. Was Allied the kind of film to live up to those expectations, or another Zemeckis “also responsible for…”?

In 1940, Canadian SOE agent Max Vatan (Pitt) teams up with French Resistance operative Marianne Beausejour (Cotillard) on a near-suicidal mission behind enemy lines: the two fall in love and marry afterwards, raising a baby girl in the suburbs of London. But their idyllic existence is torn apart when Vatan is informed that his wife is suspected of being a German operative; if found to be true, he will be required to execute his wife personally.

Unfortunately, I have to put Allied in the substandard category of Zemeckis films, and in the forgettable pile when it comes to the lead two. It’s a film where the people behind it seemed to be in love with the early part of the premise, but couldn’t bring it all together for the middle, and especially not in the end, largely wasting otherwise good performances from the lead and competent camerawork for a story that fails to dazzle.

That first act, set in Casablanca, is where the film successfully grabs a hold of your attention. The Casablanca comparison is quite apt, and not just because of the same setting: Pitt and Cotillard are no limp fish, and their quasi-romance/assassination mission is a fine narrative to set their budding relationship too. There is tense manoeuvring with the local Nazi officials, dalliances with the Vichy French and grim encounters with Abwehr operatives. Zemeckis would never have been able to reach the heights of Michael Curtiz certainly, but he gives it a fair old shot: really, Allied feels like the kind of film where an expanded version of the first act, mixed in with a sub-plot exploring the motivations and possible betrayal of the Marianne character, would have made a wonderful film. But instead it’s basically just the prologue, maybe 40% at a push of the overall experience. And the problem isn’t that Allied is two different movies, one set in Casablanca and the other set in Hampstead. The problem is that the same characters, tone and tension can’t work as well in the second setting as they did in the first.

The crux of the plot is set up well enough, with a creepy cameo from Simon McBurney as the British “ratcatcher” helping to raise the stakes, as he icily informs Pitt of the “Intimate Betrayal Rule” that will require him to play executioner if his wife falls foul of a so-called “blue dye” operation. But after that it’s all so much melodrama and mundane soul-searching, as Max investigates matters himself and struggles to keep the pretence of a happy family life going. Decent performances and potentially interesting characters pop up in abundance here. You have Matthew Goode as an embittered airman left mutilated after an SOE mission gone wrong, Daniel Betts as a newbie pilot Max gives an off-the-books mission too, Lizzy Caplan as Max’s lesbian sister, Thierry Fremont as a drunken French resistance fighter with vital information, even Jared Harris is here, in a surprisingly understated role as Max’s immediate superior. 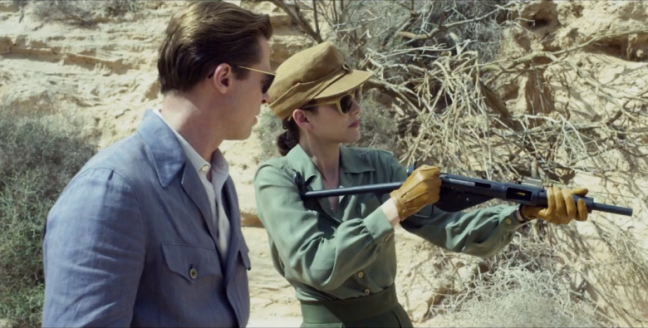 The central pair is great, it’s just a shame about the rest.

But no one gets enough time to make a lasting impression, Zemeckis intent on the drama around Brad Pitt’s character, and the “Is she/Is she not?” of Cotillard. The events of the middle and ending don’t have enough verve or momentum to them to make this something worth getting really engrossed in, as we swing between drunken “Cest la guerre” parties and Max gazing wistfully into his wife’s eyes. Things only pick up when Max takes a more active role in trying to find out the truth about his wife, and at that point the film is back, briefly, to being a behind enemy lines spy thriller, not a relationship drama.

I won’t spoil the ending’s content, other than to say that the resolution, and what occurs between it and the credits, is rather flat. This seems to me to be a story that could have used a little bit more ambiguity: not on the question of whether Marianne is a double agent or not, but on the morality and inner motivations of that character, which gets laid rather bare in an unnecessary epilogue section that clashes significantly with the tenor of the rest of the finale. We don’t need to know everything, and someone like Marianne, first seen on screen perpetrating a giant falsehood, deserved something a bit murkier as an ending. Allied should have been a film to keep the audience guessing, a character study without a conclusion. It not only has a conclusion, but it gives you a bibliography and some notations to boot.

But, the film is not a loss, or even truly terrible, thanks largely to Pitt and Cotillard, who I would be willing to see again sharing the big screen. Pitt is reserved, haughty and silently courageous, making the moments where he softens up or loses control all the more memorable. Cotillard exudes that old school, grace, charm and sexuality in every turn, easily playing a manipulating agent at every turn. The relationship between the two evolves nicely, aided by some well framed and choreographed sex scenes that litter the production, some art-like, others crude, but all of them serving a purpose to the narrative. Allied is a film that, to a point, wants to keep you guessing about Marianne, and wondering whether Max would have the fortitude to actually take her life if she was proven to be in the Nazi pocket. Pitt and Cotillard do their part, but the story and script don’t.

That script, by the little-known writer Steven Knight (perhaps best regarded for the excellent Locke), peaks early in the Casablanca interactions between Pitt and Cotillard, and never quite gets back to the same level. Indeed, its method of telling the story leads to some inevitable examples of fridge logic, not least in its over-estimation of the abilities of the Abwehr, probably the worst sin of historical accuracy that Allied has. At least it does a half-decent job of showcasing World War Two era London with its sexual promiscuity and liberal indulgences, framed neatly against a backdrop of searchlights, flak cannons and Luftwaffe bombers crashing to the earth in flames.

That cinematography, with Zemeckis’ frequent collaborator Don Burgess in that role, is another reason why Allied isn’t a write-off. An opening statement is definitively made with its opening shot, an African sun left murky in the haze of the desert, and there are nice moments throughout the rest: that sandstorm sex scene, a faux one-shotter approach to the assassination job, a painfully intimate look at Blitz life and, my favourite, Pitt’s slow descent to the bowels of his SOE base to see the infamous V Section, slowly wandering into the darkness of a deep staircase and walking past a succession of oddball wireless techs.

So, if you want to see two screen icons lighting things up for a while in the hands of a great director, Allied is for you. But too much of what’s left over is not up to scratch. The supporting cast doesn’t get enough time, the story is humdrum past that 33% point, things never really get into that higher gear to make Allied great. Instead, in a genre that is fairly overdone if we are being honest with ourselves, it is in that position worse than outright failure, which would bring notoriety at the least: instead, it is frustratingly average in so many ways, and utterly forgettable because of it. No one is going to look back at 2016 and think Allied. Not recommended.

(All images are copyright of Paramount Pictures).

This entry was posted in Reviews, TV/Movies and tagged allied, cotillard, zemeckis. Bookmark the permalink.