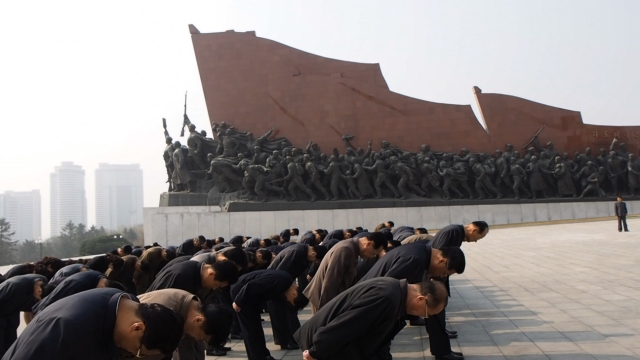 When I was teaching War and Conflict classes to kids as part of CTYI, the topic of North Korea tended to come up a lot. No matter the age, 8 or 18, students seemed to fixate on the DPRK as one of the modern ages unadulterated bad guys, a tyrannical regime run by a man not in complete touch with reality, and armed with nuclear weapons to boot. My attempts to instil some non-alarmist knowledge, like the concept of MAD or the prevalent rationality that comes with national leadership, was only partially successful.

The reason for that being the media’s depiction of North Korea, which runs into absurd territory with abandon whenever it has the chance, picking up the slightest rumour or half-baked story of life inside the DPRK and treating it as absolute fact. Though people might not like to acknowledge it, it’s as much propaganda as the stuff being taught inside North Korea to the hordes of ill-educated peasants that make up Kim Jung-un’s people. Seeking to take a closer look at the DPRK and talk about this nascent propaganda war is Spanish documentarian Alvaro Longaria. I caught a screening of The Propaganda Game at the Audi Dublin International Film Festival.

One of the most fascinating things about this production was the way that it shot things in the DPRK exactly as they were presented, and essentially left it up to the audience to decide if and when they were being fed a lie. The opening shots make North Korea look like any other developed country in the south-east of Asia: children play, couples get married, people scurry to and from work. The skies are blue, the skyscrapers are tall, the streets are clean. Indeed, they are a little too clean.

And therein lies the problem. In attempting to whitewash the state of their country to the utmost, the DPRK authorities end up showcasing the very lie they are trying so hard to cover up. While it is true that North Korea gets its fair share of unfair headlines, those designed to titillate an audience eager to be presented with a crazed dictatorial regime, Longaria’s trip to Pyongyang showcases more the efforts of the North Korean’s to force a pristine image of their world on the rest of us.

For every denial that liberties are curtailed, there’s evidence to the contrary. North Korean officials insist that people are free to wear what they want, even the women: but there are a lot of plain dark clothes on the men, and the women’s dresses all look exactly the same, albeit with a few different colours. They deny that haircuts are regulated, but everyone is more or less the same. They insist that free education and free healthcare are dominant principals of their society, but every facet of that state provided service comes with an overwhelming emphasis on praising “dear Leader”, to the point that tourists allowed into the country are required to pay their respects to the massive statues of former tyrants.

Longaria is rarely left along during his trip, tended to at nearly all times by a host of DPRK military and civil figures, not least the incredibly curious Alejandro Vao de Benos, a Madrid native who claims to be a North Korea citizen and wears a DPRK military uniform (replete with medals), though the reality is a bit murkier than that. What he is, beyond doubt, is a sort of North Korean advocate to the rest of the world, and he happily puts himself in front of the camera to praise the country and dismiss its many problems whenever the opportunity arises.

Longaria is happy to let de Benos talk away, and the picture that you get of this sycophant is undeniably creepy: a person clearly in love with the idea of being a praise-worthy idol for an entire ntion, and with such little effort required. De Benos guides Longaria around, meeting military veterans, visiting those colossal statues and stopping random people on the street so they can offer thoughts on life in North Korea, all with party officials hovering around. De Benos seems to be a man so in-depth into what he has been doing for decades at this point, that it’s hard to tell whether he actually believes his own lies: and lies they are, even if the rest of the world is not entirely guiltless.

De Benos provides an outlet for Longaria to ask questions of “Juche” the philosophy that the DPRK leadership claims guides is every move. De Benos offers limited answers, and no kind of serious rebuttal to the claim of a leading academic, who colourfully insists that Juche is nothing but “platitude after platitude”, a shallow philosophy about man’s power to master his environment, that has little to no real meaning when it comes to domestic or international politics. No one in North Korea, not de Benos, not the hovering civic figures or normal citizens, can adequately explain what Juche is, and it’s remarkable how many of them end up parroting the same line, that Juche cannot be explained, but can only be experienced. The holes all over Juche are evident, to everyone except the North Koreans.

Longaria’s jaunt through North Korea takes on elements of a black comedy as things progress. He is taken to fabulously ornate museums, gyms, hospitals and other staples of a modern society, but everything is deserted. He is invited into state provided homes, but when he asks to have a look in the fridge, suddenly the homeowner – or occupier – comes down with a sudden case of shyness. In North Korean schools, he watches children as young as 3 or 4 begin what will surely be a decades long instruction in synchronised praise of the DPRK leadership. And, most tellingly, when he seeks to investigate the North Korean treatment of Christians by requesting he be allowed to go to Mass, he is delayed a few days and then presented with an idyllic church, where the congregation sings a bit too well, and that is, remarkably enough, missing an actual priest. Longaria, skilfully, gives the North Koreans just enough rope to hang themselves, cheerfully filming the obvious falsehood being peddled before him, with the North Koreans beaming with smiles all the while.

The DPRK is, thus, trying so hard that it simply drawn the spotlight on itself a bit too much. De Benos will presumably not be too happy with Longaria’s finished product, where every but of state-sponsored propaganda he utters is immediately countered by a western equivalent, a host of UN officials, human rights organisations and knowledgeable academics, who paint a radically different picture of life in North Korea. 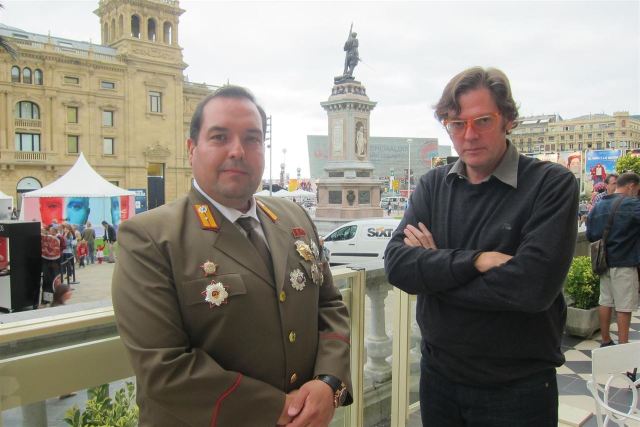 De Benos is an intriguing, but deeply unnerving, figure.

The films central point, one cruelly forgotten in the media’s sensationalism of the country, is that the real victims of this propaganda war are the citizens of the DPRK themselves. Many of those alive today had to survive the economic crash and famine period in the 90’s. Now they live in a regime where they are ceaselessly battered by propaganda, and where there seems to be no way out. On the other side, entities like the United States and others seem more concerned with North Korea as the power behind the Kims, and not the place where millions of people live without adequate human rights, or hope for the future, a reality that would smudge the more monochromatic message. Indeed, if there is a flaw in the film, it is the sense that Longaria doesn’t want to push things too far with its refutations, lest he actually get some of the people he interviewed into trouble.

Longaria is the documentarian, but is barely in his own story. His camera mostly just shoots as he walks, and only that eye-drawing opening sequence seems in any way staged, Longaria trying to toy with the audiences’ expectations by presenting us with that alternate vision of the DPRK that we are unused to. He mentions at one point that he fears the Korean propaganda might actually be working on him, such is in unrelenting nature and constant message, but he balances the scales with enough looks at those opposed to such things, not least those direct victims: those who have managed to escape from the country, and now try and bring greater international attention to the true tragedy occurring north of the 38th Parallel. Longaria gives them an avenue to talk to a wider audience than they might be used to: if nothing else, The Propaganda Game is praiseworthy for that.

And it also does shine a very welcome and needed light on the DPRK mind-set, which doesn’t get enough airtime. It isn’t enough to simply dismiss North Korea as a nation of dictators, army officers and mindless drones: this is a country where decades of false education has created an institutional feeling of “us against them”, and a belief that everyone else, bar China, sort of, is the bad guy. I think that if enough people and political leaders understood that, they would realise that playing into the role and going toe to toe with North Korea as often as they do only exacerbates the problem.

North Koreans think they need nuclear weapons because they will be destroyed otherwise: more than one namedrops Iraq as a potent reminder of how powerless a nation is unless it has the kind of destructive capacity to make outsiders think twice. Every snide remark bout the paucity of the North Korean military, in terms of modern equipment and training, simply seems to make the DRPK want a bigger and bigger military, even if its citizens have to starve in order for it to be achieved.

While I doubt that this will reach enough people to be a true game changer in the perception of North Korea, which will likely remain the “hermit Kingdom” for some time to come, The Propaganda Game is a very decent and very watchable account of how North Korea works, when being viewed by outsiders, that isn’t afraid to mix in some black humour to the otherwise serious proceedings. Longaria’s a decent filmmaker, and I’ll certainly be looking out for his name more in the future on the basis of this. Highly recommended.

(All images are copyright of Betta Pictures and Metrodome Distribution).

This entry was posted in Reviews, TV/Movies and tagged dprk, film, longaria, movies, reviews, the propaganda game. Bookmark the permalink.