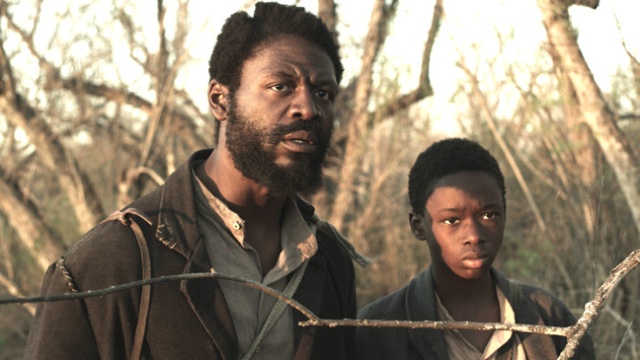 A journey about influences and growing up, in the harsh world of 1860’s America.

Race relations and the history of African Americans in the United States around the Civil War is a topic that has already been covered this year, in spectacular fashion, with 12 Years A Slave. But there is plenty more to be said on the subject, and into that space comes The Retrieval, a different film, not just in terms of budget or notice, but in its general focus. 12 Years A Slave was about the intensely personal journey of one man through the hellish slavery system. The Retrieval is more about growing up in such an environment and the masculine relationships of black men in 1860’s America, but it still has more than a little to compare with Steve McQueen’s great work.

Black teenager Will (Ashton Saunders) and his harsh uncle Marcus (Keston John) work for the slave catcher Burrell (Bill Oberst Jr) during the American Civil War, helping to find runaway slaves for their master. When the two are sent on a special mission to find a particular target, Will finds himself caught between the influence of his uncle and the path offered by the man they seek to trick, a Union gravedigger named Nate (Tishuan Scott).

The Retrieval has a lot of different elements in it, a confluence of genres and ideas that fit together nicely enough. It’s partly a war movie, with the Civil War setting and a well executed (but somewhat pointless) battle scene around the half way mark. It’s a story about slavery, with the journey of the main trio going by the reality of the institution in the southern United States, and the various consequences that it is a part of. And it’s also a simple film about growing up and choosing your father figures.

It’s on the last score that The Retrieval works best, but it can’t really save the film all that much. Unfortunately, The Retrieval suffers from an overall dullness in so much of what it wants to do and portray, a lack of engagement very much evident when I watched it. Maybe the characters weren’t fleshed out enough, maybe the antagonist was too boring, maybe the constant scenes of travelling interrupted the flow of the film too much, maybe there were too many asides from the main point. It was probably all of them, but whatever the reason, The Retrieval moves from its best part – the Will/Nate relationship and the dialogue they share – to its worst at a constant rate, back and forth, stuttering under the weight of the journey director Chris Eska wants to show.

At least that central relationship is good. Both Will and Nate are damaged individuals, who have had their lives changed forever by the evil that was slavery. Will still has a chance to make something positive of himself, if his Uncle will let him and if Nate will help him. Yes, he’s a bit of a cliché character, but he fits very well in this story and setting, as much as Nate does. Throughout The Retrieval, the tale of the two getting closer and learning to trust the other is well crafted, taking in themes of the morality of killing, the power that regrets can have on someone and the necessity of making hard choices that will define the rest of your life. However, the overarching beats of their journey are nothing unique in most respects, in fact you could say that it is a road well travelled in film. That also does not help with the feel of The Retrieval being duller than it has to be, as the running time starts to stretch out to longer than is really necessary.

The Retrieval winds its way down to a double conclusion, wrapping up a notable loose end in Nate’s past and then dealing with the issue of the slave catchers and Nate’s future. Neither ending is likely to be what the audience expects exactly, but they are both suitable for the plots that backed them up, albeit maybe a little bit too low key in the case of the latter. I suspect a lot of the budget was wasted on a somewhat unnecessary battle scene half way through, funding which should have been earmarked for the finale, or at least I think so.

The Retrieval could do with a slightly better villain to keep things a bit more tension filled.

In terms of acting, it’s a mixed bag. Saunders is his best as Will whenever he is talking to Nate, changing his own fate and becoming a stronger individual through the course of the film. On his own or with other actors, he isn’t quite as good, struggling to make the same impact. Scott is strong as Nate, maintaining a stern but affectionate characterisation throughout, which helps give The Retrieval a necessary backbone in its cast. John is underused in the half-antagonist role of Marcus, while Burrell is a cartoonish throwaway role for Oberst Jr.

Visually, The Retrieval has to keep things simple I suppose, lacking the budget for anything else. The lighting choices and the filters suit the film, with the thin woods and barren fields working well with the plot being offered. But, long before the credits roll, you will have gotten sick of the same travelling shots, the same vistas, and the same overused environments, the same “establishing shot/back and forth dialogue shots” formula, which help to give The Retrieval the sense of dullness which drags down the story it is trying to tell, a far cry from the impressive opening vista of Will approaching a house at night-time, while cannon fire flares in the background.

The script is alright, with the right kind of language to mark the characters and the period out, very much like the script for 12 Years A Slave, just without the same moments of drama. It’s simple but effective wordsmithing for Will and Nate, which helps make their relationship the films high point. “Authentic” is the word that I would use I suppose, words very true to the setting without getting too over the top or unintelligible. The score is basic but decent, with much of The Retrieval done without any kind of melodolic accompaniment, but not suffering from a  sub-par effort when the music does play.

-I did find it a bit weird that someone of Nate’s age and experience never copped to the deception being played out all around him. That bothered me a bit, seemingly a reduction in logic to ensure the smooth sailing of the intended narrative.

-The segment surrounding Nate’s “woman” was strangely endearing. It would have been so easy to make a happy ending for Nate, or at least a somewhat happy one, but it was more fitting that Rachel didn’t want anything to do with him anymore. Real life doesn’t allow for healed relationships in such circumstances.

-The ending, where Nate essentially commits suicide to save Will’s life, also was suitable, showing plainly the strength of the bond that had been created between the two. But, I felt like the entire thing could have been made a bit more exciting without detracting from the narrative.

The Retrieval is OK. For its budget, it’s an impressive enough accomplishment, but suffers from a certain dullness, with its 90 minute run time being a bit longer than it really had to be. The general pace of the plot and the nature of the direction calls to mind a work that would be better suited to TV than the big screen, and maybe that’s where The Retrieval would have been better off, sad to say. The central relationship and performances are strong, helped by a decent script, but The Retrieval struggles to maintain the interest of the audience at times, and that can be a real killer for a film.

Solid, but unlikely to stay long in the memory.

(All images are copyright of Variance Films).

1 Response to Review: The Retrieval