Edit: Man, I hate this post title. But how could I do it differently?!

The Hunger Games: Mockingjay – Part One 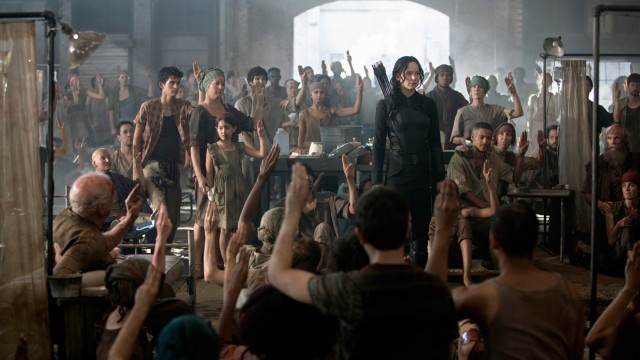 It’s that time of year again!

Yet another book adaptation whose finale is being split into two parts, Mockingjay brings Katniss Everdeen and Jennifer Lawrence, the darlings of cinema for the past couple of years, back to our screens. Leaving aside a few complaints, I’ve been mostly full of praise for The Hunger Games and its film adaptations, much of that being driven by the sheer power of Lawrence’s performance in the lead role. For the first two I was approaching them as someone who had not read the books. Now, I’ve read all of them, and was eager to see how Francis Lawrence would approach this final chapter, when he is obligated to break it clean in two.

Katniss Everdeen (Jennifer Lawrence) is the Mockingjay, a symbol for a growing revolution engulfing Panem, a role she doesn’t know whether to embrace or struggle against. In the long thought lost District 13, President Coin (Julianne Moore), propaganda expert Plutarch (Philip Seymour Hoffman) and a now sober Haymitch (Woody Harrelson) plan out how to use Katniss to win their war, even while the Capitol’s President Snow (Donald Sutherland) tries to use the captive Petta (Josh Hutcherson) to hurt her.

The decision to split this last chapter in two, the go-to move for Hollywood adaptations it now seems, means that Francis Lawrence is scrambling to form two films with a consistent narrative instead of one, and the result is as purist an adaptation as you might have expected. Fans of the books will undoubtedly cheer, but for the rest of us, a two hour slog through just one half of Mockingjay makes for a somewhat dull, plodding affair, that isn’t sure what kind of message it wants to put out, or where to draw the line.

Mockingjay – Part One jumps from idea to idea fast, from Katniss in “propo” segments devised by Philip Seymour Hoffman’s Plutarch, to vying mentally with Julianne Moore’s President Coin to pining for lost friend/maybe more than a friend Peeta, whose tortured induced defences of the Capitol she is forced to endure. And in all of this is next to repetitive set-piece visits to Capitol atrocities, meandering trips around the underground civilisation of District 13, and a truly wasteful focus on a non-existent quasi romance with the Gale character.

The film does come to life on a few occasions, not least whenever Katniss isn’t onscreen. The rise of Coin as a more traditional politician will be important for Part Two, and Lawrence (director) nails scenes of the growing revolution. But when Katniss is around – that is, for most of the film – the cavalcade of whining, brooding and mental instability starts to grate. In the first two instalments we saw plenty of the same, but Katniss was still doing something, being pro-active about her situation and her fate. Here, the Katniss character is largely a tool for others, and Mockingjay – Part One suffers from the fact that it is restrained from showing some more of Katniss’ more active involvement in the anti-Capitol revolution (which makes the decision to fill out of the film to over two hours even more baffling). With no more Hunger Games to focus the last half of the film around, Mockingjay – Part One seems like it is unsure of how to frame itself, with a certain lack of payoff in its final act (a problem Catching Fire also had). Much like Harry Potter And The Deathly Hollows – Part One, this film almost seems like an unwanted task, getting the more dull parts of the Mockingjay narrative out of the way before the action and revelation orientated finale that will be Part Two.

At least Jennifer Lawrence is still delivering the goods. She’s been one of Hollywood’s great assets over the last few years, and this year, of all years, is one in which we should focus entirely on what she brings to the screen, and not the tawdry and despicable attempts to cast an eye on her private life. Her Katniss is as intense and enthralling as she was before, a frail, damaged woman whose psyche is being torn to bits by the expectations of the rebels and the targeted probing of President Snow. She doesn’t get enough time to be the strong, powerful woman that she turns into at the right moments in The Hunger Games and Catching Fire, but the Katniss of Mockingjay – Part One is still one of the best female characters of 2014.

The ensemble around here is a bit less distinguished, though I have no major complaints, beyond the sheer number of them. Moore plays Coin with the right mix of authority and underhandedness, Hoffman gives Plutarch his all in what he probably didn’t realise would be one of his last roles ever (the film is, generously, dedicated to his memory) and Hutcherson is great in the brief snippets that we see of him. Woody Harrelson’s Haymitch is as great as always, and could have used a bit more screen time. bDonald Sutherland continues to imbue Snow with menace and carefully balanced machinations. Less good is Liam Hemsworth as Gale, Elizabeth Banks as Effie or the bit roles handed out to Natalie Dormer or Sam Claflin, which are either improperly acted or not given enough time. There’s no real reason for Effie to be here, no real reason Plutarch and Cressida could not have been conjoined. Purist dedication strikes again.

Visually, Mockingjay – Part One takes a bit of a different turn than the last two, with more shots and direction reminiscent of war films then before, with glimpses at a wrecked District 12 more Fury than The Hunger Games. Panem in civil strife is a tortured, rubble strewn, bullet ridden place, where black smoke meets glaring alarm lights. But there are plenty of overused shots – District 12 gets two visits and I was truly bored of seeing that plane taking off and landing by the end of proceedings – and very limited action set pieces, which contributes to the overall feeling of having to suffer through this Part One to get to a more engaging Part Two. At least the direction manages to stay in tune with one of the films key ideas, Katniss as the manipulated propaganda figure, with some of the better visual moments focusing on how her very image is changed and altered to suit whatever end.

The script is nothing to write home about, unfortunately. It’s a straight enough adaptation of the book, to the extent that at times I felt like it was almost page for page. Has Francis Lawrence been watching Zach Snyder’s Watchmen? Katniss still has the right voice (aided by Lawrence’s delivery) and there are individual moments (like anything involving Haymitch) that stick out. But, for the most part, it’s fair to say this script won’t be sticking in the memory.

Musically it’s real up and down. Most of James Newton Howard’s score is forgettable enough, but there are a few brief, thrilling exceptions. Most notably, an adaptation of the source materials “The Hanging Tree”, depicted as a folk song from the universe, whose quiet performance by Katniss melds into a look at the growing fury of the revolution, backed by sweeping orchestral and choir input, in what was easily Mockingjay – Part One’s best sequence. 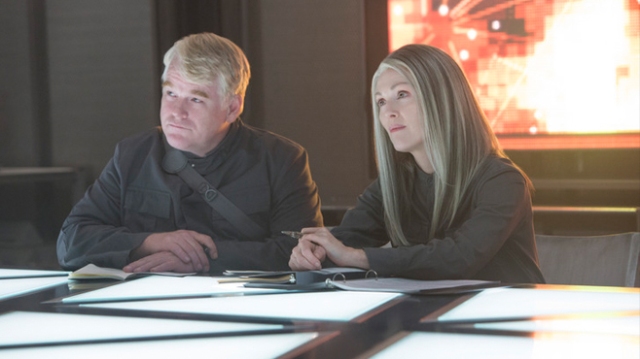 -I did expect the chosen break point between films, it being the only moment around halfway that could serve such a function. I was a little surprised by the manner in which we got there though, I half-expected Katniss to be included in the raid to rescue Petta, if only to give her something to do. It was not to be, and the effort to involve her in affairs with the conversation with Snow was a little underwhelming.

-I am fairly tired of the Katniss/Gale angle, and was tired of it in the books too. I just don’t see the attraction between the two in as engaging a way as I do between Katniss and Peeta, and those two only share the same room once in this entire film. Maybe its Liam Hemsworth, maybe it’s the boring nature of their trips into the wilderness together, but either way it just doesn’t work for me.

– I did really enjoy what moments were given to Julianne Moore. It was important to show Coin as a political leader in an isolated community – blunt, to the point, all business and no subtly – and then to show her as the potential leader of all of Panem – manipulative, clever and playing to the crowd. Not unlike President Snow. Which was the whole point of course.

-Man, that third act. It really doesn’t know what to do with itself, what with most of the narrative focused so squarely on Katniss. With no kind of action set-piece and a clipped finale with the raid, it just lacks a certain punch. Even Catching Fire had greater excitement with its conclusion, and the “revelation” of Peeta’s “hijacking” was foreshadowed just a bit too much.

-The sequence surrounding “The Hanging Tree” really was well put together. Sure, it makes little sense for the unarmed mobs of people to be charging straight into automatic fire, but as a symbolic representation of the effect Katniss has on people, it worked very well.

-Some shocking and dark things are to come, with death and heartache aplenty. I think that Mockingjay’s conclusion – the book that is – is one of the better that I have read from any series, and Mockingjay – Part One has set all of that up nicely. With another 120 minutes to play with, both Lawrence’s should be able to serve up something that can both get the blood pumping with its actions and wrap it all around a very satisfying emotional core.

I have high hopes for Mockingjay – Part Two, which still has enough ground to cover for it to be viable without having the detriment of some of Part One’s filler to drag it down. Splitting Mockingjay in two was still totally a financial decision, but there is that silver lining. We have had to endure what was, frankly, a bit of a borefest in Part One, but the reward should be well worth it. On its own merits, I cannot call Mockingjay – Part One a film worthy of a firm recommendation. Lawrence and most of the cast are still great, and there is a halfway decent story – or half of a halfway decent one anyway (quarterway?) – buried in there somewhere. But the lackadaisical pace and stunted narrative of a film halved from a whole book drags Part One down a fair bit, and makes it easily the most unsatisfying Hunger Games film to date. Recommended for those waiting patiently for the thrilling conclusion (and it is, in the book anyway, a great conclusion), but for those just looking to drop in, not so much.

(All images are copyright of Lionsgate).

2 Responses to Review – The Hunger Games: Mockingjay – Part One