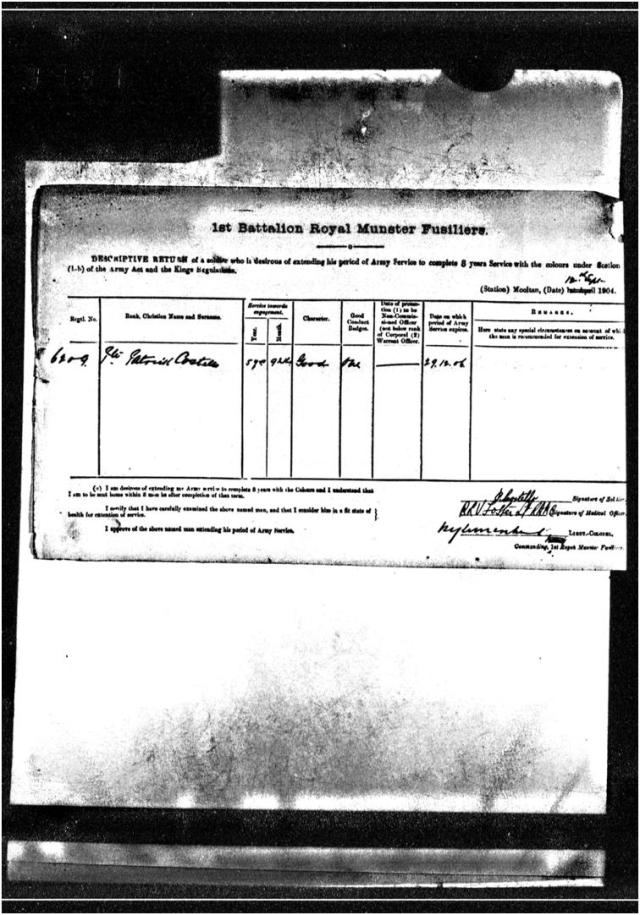 Next up, a very small “DESCRIPTIVE RETURN” form for a member of the Royal Munster Fusiliers. It simply lists a few basic details about Costelloe – service number, name, length of service, character (“good”) etc. The document is listed as being from “Mooltan”, which is a city (now “Multan”) in modern day Pakistan, which matches the previous notes on Indian garrison service. It is dated to 1904, and a second copy of this document is also included in the records, for whatever reason.

There follows a document entitled “Proceedings On Transfer to THE 1ST CLASS ARMY RESERVE” with a stamp, made in Cork, dated to the 10th of November 1910 – this would be the date of “reupping” I believe and not the date of the original filling out. Costelloe’s cause of transfer is “On the expiration of his period of army service”. His conduct was apparently cause for some praise: “Exemplary, clean, sturdy, intelligent”, or it might have been the standard waffle. When asked what “trade of employment desired” outside of army life, Costelloe has reiterated the basic “Labourer”.

The next section is a bit more illegible. Costelloe has two “G.O(?) Badges”, and then medal details of which are listed after. One, perhaps the King’s African Medal of earlier, is listed “with clasps”, given in “Cape Colony”. There is at least one other medal, probably just a campaign medal, but the details are unclear.

This section continues onto another page. Costelloe’s “Musketry Classification” is “M.M”. I’ll admit to not knowing what this stands for, perhaps “Marksman”? He has never been employed on staff or regimental duties. His commanding officer, again fairly unclear, signs on the 15th of December 1906. Costelloe then acknowledges he has been paid with his signature, with a medical officer confirming Costelloe is still fit for service afterward, two things dated to the 16th of January 1907.

The next page is a bit more interesting, consisting of a description of Costelloe upon his transfer. He is 26 years old (and 1 Month), which fits his previous enlistment at 18. He is 5 foot, 4 ¾ inches, which is actually a slight gain on the height listed when he first joined up. His chest (34 ½), and waist (33 ¾) measurements are listed (they haven’t changed much) and then helmet and boot sizes. His “Complexion” is described as “fresh”, his eyes “grey” (they were previously brown). His hair is “auburn” (once “Reddish Brown”). His desire to be a Labourer is reaffirmed. His “Intended Place of Residence” is to be 26 Quarry Road, Thomondgate, Limerick. Under descriptive marks, a “Scar On Right Eyebrow” is listed, but no origin of this injury is recorded. Costelloe’s term of service is listed as eight years and 19 days, before his commanding officer signs off on things for the last time, all of this taking place in Gosport, a town in the south of England. 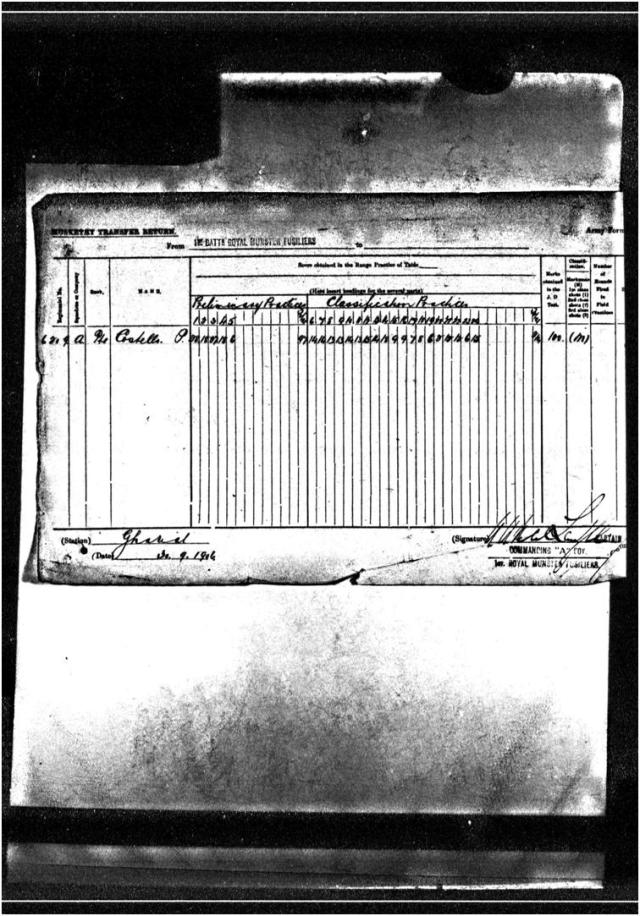 Next, two copies of a Marksmanship test that Costelloe took on the 30th of September 1906. Most is incomprehensible to me, but it seems like Costelloe was a good enough shot. His marks for the “J.D test” is 100 and he is classed as “Marksman”.

Next up is a “Regimental Defaulter Sheet”, essentially a piece of documentation listing offences committed by the person concerned during his service. There’s really only three things to be concerned about, two of them being Costelloe’s enlistment and discharge dates. The other is the aforementioned “Falling out of line” issue from early in the First World War. 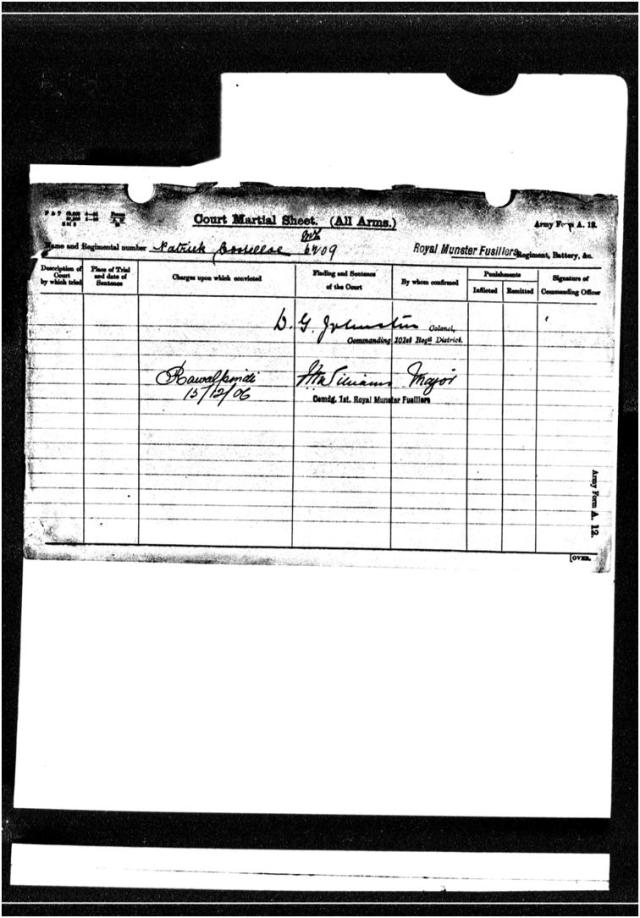 Next is a “Court Martial Sheet”, similarly empty, seemingly containing just a signature of a commanding officer.

Things are getting fairly routine and repeated now. Next are more forms related Costelloe joining the reserves in 1907 in Gosport, more declarations, more sign offs by medical examiners, more reasons for the transfer. 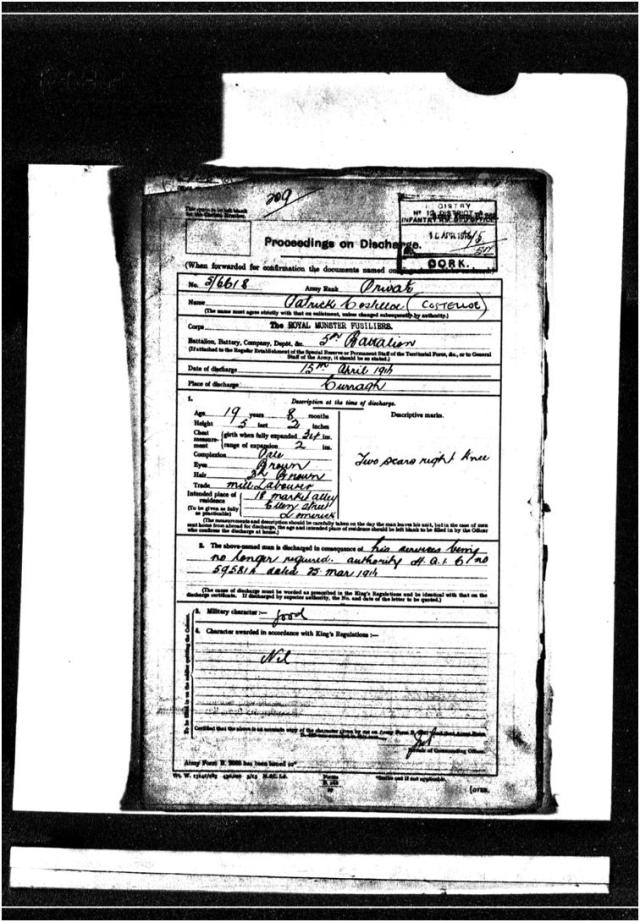 Edit: As an eagle eyed commenter has pointed out, the discrepancies in the following forms indicate a clerical mix-up, and are most likely those of a different Patrick Costello(e).

The next sheet is more interesting, being discharge papers from 1916. Costelloe, now officially with the 5th Battalion of the Fusiliers it seems, was stationed in the Curragh, County Kildare. In the description, there is a bizarre and obvious error, as Costelloe, who must have been at least 35 in 1915, is listed as being “19 years 8 months”. I can’t really explain this odd discrepancy. He’s also dropped a bit of a height, now 5 foot 2 inches. His eyes have now gone back to brown when previously declared grey, and his hair is just plain brown now. His intended occupation is now “Mill Labourer” though what work they might have had for a man with only one leg is in question. A new address, in Market Alley, Ellen Street is also listed. The scar above his eyebrow has been forgotten under “Descriptive Marks”, replaced by “Two scars right knee”. Costelloe is discharged “in consequence of his services being no longer required”. His character is still “good” but with no additional comments.

The forms continue with information we have already seen on service location and medals, though it is odd to see “Campaigns, Medals and Decorations” mention Costelloe’s stationing at home between his evacuation from France and his eventual discharge. I guess these forms have a very specific focus. Costelloe is discharged on the 15th of April 1916: just over a week before the Easter Rising.

Finally, there are just some forms related to campaign decorations, for 1914.

This is essentially all that I have on my great grandfather, with details on his life after his army service sketchy to non-existent from within my family. I know nothing of his personality, his politics or his temperament. The forms offer just a simple glimpse into his life and the experiences he had – two wars, an horrific injury, a wife, a family and simple prospects for employment after it was all finished. He is not so untypical of many men of his generation I suppose. You might also say that, considering the near constant fighting that the 2nd Battalion of the RMF was exposed to during the war, with appalling casualty rates, he might actually have been lucky to have gotten out of the fighting when he did.

This is Patrick Costelloe, likely a veteran of the Etreux rearguard action, a Royal Munster Fusilier who sacrificed a great deal for the cause. Forms like these give us a tangible connection to those times, and help to personalise the impersonal. For that reason, they are a crucial part of any remembrance.