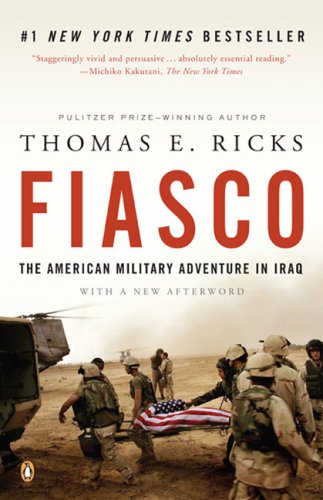 In his most famous work, US journalist Tom Ricks takes a comprehensive, and utterly searing look at nearly every aspect of “Operation Iraqi Freedom”, one of the great military blunders of modern times.

Ricks can be a bit of an acquired taste. His follow-up to Fiasco, The Gamble, was fairly sycophantic towards its main subject, General David Petraeus, and some of his other works don’t really pass muster.

But Fiasco did, and still does. It is undoubtedly, in my opinion, the best book yet written about the Iraq War and the comically inept lead-up to that conflict, from the pre 9-11 days of complacency to the growing horror show days of 2004 and 2005. This is a story of a fiasco: a complete and near total one, that should never ceased to be judged as such. Ricks lays it all out, from start to 2006. It is “near-term history” at its finest, a look at a recent event with all of the gravitas and technique as if it happened 50 years ago.

Titling his book as he did was a brave move by Ricks, setting himself, from the very start in the eyes of the reader, the task of justifying that title: of showing us just why the Iraq War was, indeed, a “fiasco” and an “adventure” as the sub-title reads, a description to be read in the most negative way. Ricks succeeds brilliantly. You might think that the task is, with the benefit of hindsight, like shooting fish in a barrel, but by the end of Fiasco, you will be left in no doubt as to the complete and magisterial approach and argument that the author has made to the subject. It’s a tough book. It isn’t intimate or concerned with making the characters jump off the page. What it is, is a stern, even-handed overview of a diplomatic, intelligence and military disaster, told in a devastatingly straightforward manner, point to point, week to week, fiasco to fiasco.

Reading Fiasco, you might well be struck at how little Ricks is actually talking. He largely lets the myriad of figures, from President Bush to Wolfowitz to Bremer, speak for themselves, outlining their own misjudgements and failings in a gigantic amount of directly quoted material. It is for Ricks to sit back and skewer large parts of this, with an eye for two things especially: the catastrophic, and dare I say wilful, intelligence failure, that lead to both an invasion of Iraq to destroy non-existent WMDs and a misunderstanding about how the occupation would play out, and then the complete lack of genuine strategy employed, wrapped around the yawning silence offered for the key question: Why are we here?

Ricks does it all in an account that is eminently readable and that is only difficult to get through insofar as your jaw might hurt from the sheer amount of times it drops. You marvel at the way Hussein was earmarked for targeting mere hours after the planes hit home on 9/11, on no more basis than he was a recognisable “bad guy”. You are agape at the way that certain Iraqi exiles are given such wholesale trust for their message of a country that would welcome America as liberators. You are stunned at how a rapidly advancing conventional assault breeds complacency about what is to follow. You are enraged at the incompetence of the CPA and its moronic leadership, who are probably the most guilty, post-war, for what followed (in my opinion, I would actually have L. Paul Bremer up on charges if possible, for gross and unforgivable incompetence that lead to innumerable lost lives).

Ricks’ intense and comprehensive research outlines all of the failures, how they influenced and caused others, and how it all led to the quagmire that is the Iraq War, a terrible black mark in the recent history of the western world, a war that, after reading Fiasco, you will be in no doubt about as to its pointlessness and botched military design. But what will enrage is the knowledge that, even if actually going to war with Iraq was inevitable (and it wasn’t), it still didn’t have to be this way.

The failures of the Republican administration at the time, aside from its partisan appointment process and blinkered worldview, came down to a simple flaw of preaching about the worst case scenario while preparing only for the best case: of actively rejecting and silencing dissent against the plans of the government when they fail to mesh with the stated “line” on issues relating to post-war planning and the potential reaction of Iraqis. Ricks spends the majority of his time outlining this astounding line of thinking, which almost leads the reader to wonder if the American leadership of the day wanted to demonstrate just how not to do it.

There were other failures. A military that seemed to have forgotten every hard lesson learned in Vietnam. A media environment that lacked the right amount of critique and actual holding of the government to account. A political opposition that largely kow-towed in fear of looking like they held a lack of patriotic élan. The list goes on and on.

I was always struck, reading Fiasco, about all of that, about how the Iraq War was the almost perfect confluence of failure. I had, in my idealistic younger days, actually supported the Iraq War on the basis of “Hussein + WMD’s = Bad”, so any effort to get rid of them had to be good. I had never put in the requisite amount of thought into the campaign since, other than to acknowledge that it had all gone horribly wrong, and it took Ricks’ book for me to realise that it was more than just an intelligence failure about fictional chemical weapons, it was so many other things. The lack of WMDs’ would, after all, actually be forgivable if things worked out for the better in Iraq regardless, but they simply didn’t. It was Fiasco that ingrained in me the reality of what happened and what was happening in Iraq at the time. No other book offers as cogent and understandable a timeline for the Iraqi insurgency, or details how it came to be exactly, from a position where it might very well have never come to be.

Ricks does not offer much in the way of future prediction in the closing pages of Fiasco, probably already thinking of his less good follow-up The Gamble, and some might think that he goes a little easy on large parts of the American military, choosing to portray a lot of that organisation as the unwilling victims of a crass and foolish administration as opposed to active players in the titular quandary. But those are small and forgivable flaws in a book that has, as its aim, an outline of the most far reaching mistake in the recent history of our planet.

What did I learn about war from Fiasco? Basically, I learned what not to do. Fiasco is the story of, perhaps, the greatest military mess since Vietnam, and in its pages you will find scores upon scores of cautionary tales. Never underestimate a proposed conflict. Learn to trust the right people, the ones who don’t have a vested interest in the thing that they are discussing. Prepare for the worst, not best case scenario. Always, always, always have a satisfactory answer to the questions: “Why are we here?” and “How does this end?” Never let grand strategy be lead by tactics on the ground.

And simply be prepared, for everything, in a way that George W. Bush, Dick Cheney, Rumsfeld, Wolfowitz, the CPA and all of the others culpable in the unnecessary drama that was Iraq, a drama that continues to this day, weren’t. If you want to learn about the disaster that was, and is, this campaign, you could do little better than to read Fiasco, which describes exactly what it says on the cover.